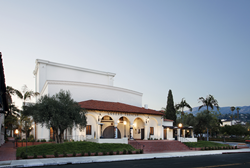 The Lobero Theatre in Santa Barbara

“I was once quoted as saying ‘The audience is never wrong,’ and I think this sentiment also applies to the Lobero. When it comes to the endurance of this cultural and architectural jewel, it’s no wonder generations of patrons keep coming back.” – Carol Burnett

Originally founded in 1873, the Lobero Theatre is the oldest continuously operating theater in California, and the fourth oldest performing arts theater in the country. It’s known for helping to launch Hollywood legends, offering world-class jazz performances, and being the center for a robust program of regional performing arts. With its relatively small seat count, the Lobero affords audiences the chance to see top talent in a more personal, intimate venue.

“As the 4th oldest performing arts theater in the nation, the Lobero Theatre tells the story of American entertainment from 1873 right up to today. There are few places in the U.S., let alone on the west coast, that better embody the changing tastes and interests of American audiences. Our 150th Anniversary is a wonderful opportunity to remember that history and to consider the possibilities that the future holds.” – David Asbell, Executive Director

To celebrate its 150th Anniversary, the Lobero Theatre created an Ovation program for its 2022/23 season, featuring headliners like Suzanne Vega, The Wallflowers, and “It’s Magic” annual show (this year personally headlined by Lance Burton). The season includes performances from acts celebrating special anniversaries of their own, like Los Lobos in its 40th year, Preservation Hall Jazz Band at 50, and Los Romeros/The Romeros Guitar Quartet on its 60th anniversary. Additionally, The Blasters with Dave Alvin recently celebrated their 40th anniversary of playing at the Lobero.

“I was once quoted as saying ‘The audience is never wrong,’ and I think this sentiment also applies to the Lobero. When it comes to the endurance of this cultural and architectural jewel, it’s no wonder generations of patrons keep coming back.” – Carol Burnett

The diverse Ovation program is in keeping with the wide variety of performing arts that the Lobero has featured throughout its history. The theater was known for hosting top African American opera talent dating back to 1889, when singer Flora Baston brought the crowd to tears with her beautiful voice, and in the late 1940s was the site of the first African American ballet troupe. The Lobero was also turned into a roller rink in the 1880s, and the site of a stirring speech by Susan B. Anthony before the historic vote which granted women voting rights.

The Ovation season gives theater lovers the chance to experience the historic Lobero Theatre and see top talent in a setting hard to find elsewhere in the U.S.

ABOUT THE LOBERO THEATRE
Renowned for high quality programs presented in a welcoming intimate atmosphere, the Lobero has been the heart and rhythm of Santa Barbara for 150 years. Originally founded as José Lobero’s Opera House in 1873, it is the oldest continuously operating theater in California, and the fourth oldest performing arts theater in the country. The opera house was rebuilt in 1924 in a Spanish Colonial Revival style designed by architects George Washington Smith and Lutah Maria Riggs. Registered as a state and city historical landmark, the Lobero is recognized as one of Santa Barbara’s architectural jewels. Today, the theater is managed by the Lobero Theatre Foundation, who works to maintain, improve, and operate this notable treasure as a performing arts theater and cultural asset to the community. The Lobero is Santa Barbara County’s first certified Green Theater and the first historic building to earn this designation. http://www.lobero.org