Tallgrass Freight’s promotion of Sean Richardson to President launches the rapidly-growing company into its second decade. 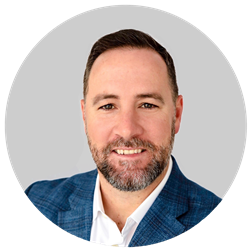 “When Sean started as an agent, he was brought in just like every other agent,” says Founder and CEO, Damon Anderson. “But it was quickly evident that Sean was going to succeed and grow. He embodies the Tallgrass values so well.”

Tallgrass Freight Co. (TGF) is pleased to introduce the company’s new President, Sean Richardson. Sean brings more than 10 years of experience as a manager, freight broker and agency owner in the logistics industry. Sean’s appointment as the company’s leader represents a new chapter for the Shawnee-based freight agent network.

“When Sean started as an agent, he was brought in just like every other agent,” says Founder and CEO, Damon Anderson. “But it was quickly evident that Sean was going to succeed and grow. He embodies the Tallgrass values so well.”

With his tenacity and dedication, Sean continued to excel, working his way up from freight agent to the Tallgrass VP of Growth and Development. “In my previous role as the Tallgrass VP, I worked with agents to establish development and growth strategies,” Sean says. “Now moving to this new role, I will have a broader perspective with a focus on all departments, including, Information Technology, Billing, Collections, Finance, Claims and Customer Service.”

As Tallgrass continues to break barriers and reimagine the future of freight in just 10 years of being in business, Sean is excited to oversee the structure of the company and concentrate on building an environment fit for everyone. Sean’s responsibilities as President will include oversight and leadership of all departments at Tallgrass, from freight agent recruitment through operations.

“Sean represents us really well,” says Damon. “With every new thing we’ve learned about him, it is clear that he’s the perfect fit for this role.”

Above all, Sean is most looking forward to continuing the legacy that has been established by Damon Anderson, and COO and Co-Owner, David Barnes. “We have such a good core foundation of experienced leaders,” Sean shares. “When the opportunity was presented, I was excited to represent Tallgrass, especially knowing people like Damon and David started this company.”

“Sean is a natural leader,” shares David. “In the first ten years, we’ve built an incredible executive team, and with the right people, we can continue to flourish and grow in the next decade. If there was ever a time to let the next generation take the lead with Tallgrass, it’s now.”

Sharing the company’s passion for relationships and camaraderie, Sean prioritizes the people-first culture and commitment to those Tallgrass serves. “I will ensure every team feels supported and has the tools and resources available to maximize their potential, not just from an agent perspective, but from a global company perspective. I want to focus on the big picture and overall vision for the future,” Sean shares.

As he looks ahead at the future of Tallgrass, Sean believes the best is yet to come. “The goal for Tallgrass Freight is not only to be in a strong position for 2023, but for the next ten years,” he says.

The company’s top-notch carrier relationships and service-first culture ensure customers have the truck they need when they need it. Headquartered outside Kansas City, with freight agents located from coast to coast, Tallgrass Freight is a destination company for top-tier agents who want to thrive. Its network of ambitious independent freight agents finds freedom and support, enjoying the perks of being their own boss, plus the joys of being part of a team. Learn more at TallgrassFreight.com.