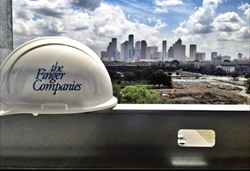 Apartment complexes are popping up all over Houston, but the building process and construction design don’t tend to get as much attention as out-of-this world appliances or other on-site amenities.

2900 West Dallas is a Montrose apartment community that is part of only 5% of apartment buildings that are built from a steel-frame construction. Opened in 2014, the steel frame construction offers much better insulation and noise cancellation between floors, keeping residents happier, among other important benefits.

The Montrose apartments are built with a 6” concrete steel frame with mat decking and another 1” of real white oak stained flooring, which serves multiple functions. This includes 6” of concrete above and below each apartment home, where your typical “stick build” or wood frame design has hollow space between each floor, creating noise echoes and other sound issues.

“I have lived in and worked in many different Houston apartment complexes, and none with a more resident-friendly soundproofing construction than 2900 West Dallas,” says resident and property manager Matthew Harms. “A common complaint in the industry is having to listen to your noisy neighbors above you, and truly, we don’t get much of that here at 2900 West Dallas,” says Harms.

The noise cancelling benefits are worth the extra time and money during the building process, but the stronger construction also provides more safety features as well as makes it more cost effective when it comes to electricity. Read more about a few of the safety benefits here.

“A building made of concrete lasts a lifetime, is more energy-efficient, and can stand the test of severe weather in almost any environment,” according to Concrete Construction.

The Montrose apartment community was developed, built, and managed by Houston real estate icon Marvy Finger of the Finger Companies. Mr. Finger has been profiled a number of times in regards to his business acumen, including the design and construction of each of his apartment properties, always aiming to create a more quality product from the ground up.

About The Finger Companies
Under the leadership of veteran developer Marvy Finger – whose 60-year plus track record speaks for itself – the Finger Companies has earned an undisputed reputation as the leading independent developer of luxury apartment homes in the country for one reason: unwavering commitment to excellence. With a visionary knack for finding the best locations, the Houston, Texas-based company has led the industry in the highest quality construction, cutting edge design, lush landscaping, envelope-pushing amenities, and unparalleled property management for six decades. 2900 West Dallas Montrose Apartments are owned and operated by The Finger Companies.