$2 Million Pledged to Hope Lodge Houston During Topping Off Ceremony 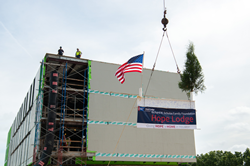 Hope Lodge Houston will be largest of its kind in the country offering 23,000 nights of free lodging for cancer patients.

Houston Methodist has pledged $2 million to help build the American Cancer Society Richard M. Schulze Family Foundation Hope Lodge. The hospital system’s support gift was announced today during a traditional topping off ceremony at the construction site to commemorate the structural completion of the building’s frame and celebrate the significant milestone.

During the event, a symbolic last beam was placed into the building adorned with cancer survivor stories, donor signatures and a spruce tree to symbolize hope and prosperity for all who will stay at Hope Lodge Houston. This facility, located at 6801 Ardmore Street, will be the largest of its kind in the country offering 23,000 nights of free lodging annually for cancer patients 12 years of age and older and their caregivers who must travel to Houston to receive life-saving treatment.

“As a physician I understand the hardships and difficulties that are sometimes associated with seeking health care. At Houston Methodist we treat many cancer patients who travel long distances,” said Dr. Marc Boom, president and CEO of Houston Methodist. “By supporting Hope Lodge we’re supporting patients – and their families – as they complete their treatments and hopefully beat cancer.”

Approximately 127,000 cancer patients travel to Houston for treatment each year and spend nearly $11,000 on lodging and transportation before taxes and meals. The American Cancer Society’s Hope Lodge program will save a combined $3 million for patients who reside in one of the 64 suites at the Houston location. Hope Lodge Houston will also offer its guests a community dining room, kitchen, family recreation rooms, a library and laundry facilities for the patient and a caregiver.

“Watching that last beam be placed on a facility our city so greatly needs is emotional,” said Annie Russell Vice President of Distinguished Partners for the American Cancer Society’s South Region. “It is a tragedy there is such an influx of cancer patients with this need, but we’re honored to be able to provide them a true home away from home at Hope Lodge Houston to ease their suffering and build hope to get them through their cancer treatments.”

The ceremony was dedicated to the campaign chairs, Janice McNair, the late Robert and President George and Barbara Bush, whose fundraising efforts have nearly reached the $40 million goal. The Hope Lodge facility, set to open in Spring 2020, needs only $900,000 to complete the capital campaign before the end of the year. The Richard M. Schulze Family Foundation established a $10 million endowment to ensure a portion of ongoing operational costs are funded. The American Cancer Society estimates the endowment will cover roughly half of the ongoing operational expenses each year, at an average cost to the Society of $50 per room, per night.

The American Cancer Society operates 30 Hope Lodges nationwide. Three are located in Texas, the first opened in Lubbock June of 2010 and two still under campaigns, the Richard M. Schulze Family Foundation in Houston and the Gene and Jerry Jones Family Hope Lodge in North Texas.

To learn more about Hope Lodge Houston, or to make a contribution towards free cancer patient lodging, visit http://www.cancer.org/hopelodgehouston.