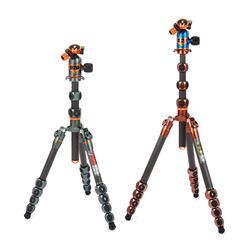 In both Ray, and the larger version, Bucky, we have achieved incredible functionality and capability, without compromising on the core requirements

Following on from the enormous success of the Legends range with Mike and Jay, 3LT’s first levelling base tripods, and the acclaimed AirHed Cine, 3 Legged Thing has just announced two new additions to the range, Ray and Bucky.

“I’ve been looking forward to this launch for over a year. The Ray Barbee tribute tripod is a ground-breaking upgrade in travel support systems, and homage to one of the most influential skateboarders ever to have graced the sport,” said Danny Lenihan, Founder and CEO of 3 Legged Thing. “As a boy, I remember seeing Ray burst onto the skateboarding scene in the iconic Powell-Peralta Bones Brigade video, Public Domain, followed by his incredible section in the follow up, Ban This.”

“I really wanted to make something that Ray, also a Leica ambassador, could use all the time, without feeling like he was carrying something cumbersome, whilst retaining all of the load and structural capabilities of our award-winning Leo tripod. In both Ray, and the larger version, Bucky, we have achieved incredible functionality and capability, without compromising on the core requirements, and have trimmed off a huge 20% in weight. We have partnered the tripod with the world’s first, visible mechanism ball-head – the AirHed Vu - another landmark innovation from 3 Legged Thing, and another reason for me to be so very proud of the work of my fantastic team in Stagsden.”

Ray Barbee commented: “I think it’s great how Danny incorporates the things that inspire him in themes for his products. I am super humbled and honoured that Danny has chosen to name a tripod for me. The brand is making a lot of cool stuff and I’m excited to be a part of it.”

Ray is 3LT’s newest ultra-compact, micro traveller. With a folded length of 35.6 cm / 14.02 “, he is the perfect companion for any trip photographers may take. Although he is small enough to fit into hand luggage, he still can take a max load of 30 kg / 66 lbs, making him a powerful tool for all photographers.

Bucky stands tall above the rest boasting a maximum height of 1.89 m / 74.48 “ and a minimum height of 11cm / 4.33”, just above ground level, giving him an impressive working range. The triple section centre column enables him to stand out, making Bucky even more versatile. With this, photographers gain greater freedom with what they can create without compromising on quality or stability.

Both tripods are constructed from 8 layers of 100% pure Japanese carbon fibre, and aerospace-grade, anodised magnesium alloy, providing incredible strength, rigidity, and durability. They feature 3 detachable legs to enable conversion to a table-top tripod with the help of 3LT’s Vanz tripod footwear. The legs can be used as boom arms for microphones or lights, or joined to the centre column to create a monopod.

The new style twist locks with O-Pads give users improved, grip, leverage and water displacement. Internally Ray and Bucky’s locks feature a new style of Chicken Lips (shims) that give improved strength and create an unprecedented level of stability. 3LT’s Rapid Latch makes adjusting the leg angles easier for those with impairments or wearing thick gloves.

These two tripods also offer impressive load to weight ratios as some weight reductions were made to the locks and canopy without compromising on strength and stability. Along with these features, both tripods have two new additions – a new AirHed and a new design of 3LT’s patented Tri-mount plate.

The AirHed Vu has been designed and engineered for strength. It features contoured security cut-outs in the detachable clamp to accommodate security pins in the underside of the new QR Octa quick release plate that is supplied with the head. These cut-outs have the added benefit of reducing weight. The AirHed Vu has a vision panel in the casing which allows users to see the mechanism move into place. The controls feature knurling on all knobs on the AirHed to improve grip and leverage and to enable users to secure their cameras in place.

3 Legged Thing’s patented Tri-mount plate, which allows for the attachment of accessories and includes 6 ¼”-20 screw threads, has been refined from previous versions seen in the Pro and Punks ranges, and is now elegantly contoured for ease of use when removing and mounting onto the canopy for low level shooting.

The other little extra 3LT have released is their Vanz tripod footwear. These are a hybrid of Stilettoz and Bootz, offering the best of both worlds. These allow users to turn 3LT’s Legends and Pro Range 2.0 tripods into a table-top system by unscrewing the legs and replacing them with Vanz. Users without detachable legs can still use Vanz if the tripod has 3/8”-16 or ¼”-20 threads on the feet, and can be used as a way to elevate the tripod away from rocky or mucky surfaces.

Ray, Bucky and the AirHed Vu are available for pre-order starting today from retailers worldwide or direct from 3LeggedThing.com.

Headquartered in two converted chicken sheds (Shedquarters & Return of the Shedi) on Kinsbourne Farm, in Stagsden, England, 3 Legged Thing is a small, British company of passionate people, creating and innovating camera support systems for photographers and videographers. 3 Legged Thing was the winner of the Lucie Technical Awards 2017 Tripod of the Year, and 2018 nominee for best tripod and best industrial design.

If you would like more information about this press release, please contact Alison Barclay or Megan Prouse on +44 (0) 1234 828834 or email marketing(at)3leggedthing(dot)com.