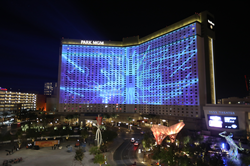 The reel features the largest mapping in the USA for Britney Spears on the Park MGM in Las Vegas. The mapping came in at a whopping 550ft x 26 stories high. The reel also showcases the most viewed mapping ever on YouTube for Calvin Harris featuring Rihanna’s “This is What You Came For” with 2.4 billion views, and counting.

Also included is our work with the amazing Intel drone team. The December 2020 Guinness World Record for the largest video game display for Xbox and marketing agency BeCore, Inc.; a historical/holiday mapping at Winterthur, the largest estate ever mapped in the USA; and for United Launch Alliance, the world’s first mapping on an operational rocket at Cape Canaveral.

But regardless of scale, it’s the people behind the curtain that make us who we are: Mike Cianciola, the phenomenally talented VP of Operations for all those crazy jobs. Jerry Weil, our Maya genius, who never shies away from a technical challenge. Michael Kory, another Maya magician, whose stunning artistic direction cannot be overstated. Rob Ostir, dark and brilliant. Leif Einarrson, our extremely talented character animator. Chase Granat, our on-site tech dude. John Kayem, our resident Photoshop artist. Sophie Bergeron, the voice behind our social media. Isabel Drean, our business development guru. Michael McCaughey, our dedicated Los Angeles office manager. Julia Bergeron, our tireless second-in-command… and at the helm - President and CEO Philippe Bergeron. He guest-starred on The Sopranos. So don’t mess with him.

For our latest reel, visit: https://www.paintscaping.com/reel

For high-rez photos, visit: https://www.paintscaping.com, and right-click on thumbnails to download.