The Drive for Life Foundation Gala celebrated its 40th Anniversary in a big way last night by bringing in over $2M for charity. Big Ten Coach Mel Tucker served as special guest speaker during the event in benefit of the American Cancer Society and many other local and regional charitable causes. Mayor David Anderson and NASCAR driver Josh Bilicki of Spire Motorsports were also in attendance. 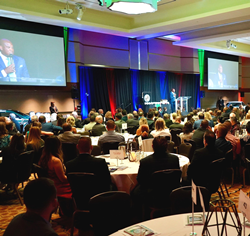 Mel Tucker speaks at the 40th Annual Drive for Life Gala which raised over $2M for charity on Monday, September 12, 2022

If we don’t get it done in this room, it won’t get done. You can’t wait for someone else to make the play. We have to make the tackle. The fight against cancer takes all of us. It takes a team effort. Everyone has a role. Everyone has to do it to the best of their ability.

Tucker—who decided to take time to speak at the event during the Spartan’s current 2-0 season—spoke passionately about the need for more funding for cancer research after losing his best friend, sports psychologist and best-selling author, Trevor Moawad to the disease.

“If we don’t get it done in this room, it won’t get done. You can’t wait for someone else to make the play. We have to make the tackle,” said Tucker.

“The fight against cancer takes all of us. It takes a team effort. Everyone has a role. Everyone has to do it to the best of their ability.”

Mayor David Anderson, who attended the event for the first time last night, said: “This kind of thing is what Kalamazoo is all about. We are focused on community and that’s why I am here. Kalamazoo is a big little city we punch above our weight and the reason we do is because people that live here care.”

Also in attendance was Zeigler-sponsored NASCAR driver Josh Bilicki, who helped raise money with two items during the Live Auction, one of which included the green suit worn at the Firekeepers 400 Race at MIS in the summer and a NASCAR racing experience.

“Last night was proof that we can do incredible things when we come together for a great cause. I was proud to come out and support my Zeigler family at the 40th Annual Drive for Life Gala which raised over $2M for the American Cancer Society and other worthy causes,” said Bilicki.

Over the last few years, the Drive for Life Gala has attracted guests beyond Kalamazoo in support of the event’s main charity the American Cancer Society, giving a new meaning to the word community. Last night, guests from all over the nation flew in to attend the gala with many of them being part of the record number of sponsors.

"The turn out for this year’s gala was amazing, we were able to sell out of every available ticket. I am blown away by the commitment I saw from our sponsors, our attendees, our volunteers, and everyone else involved. Raising $2M is a huge accomplishment for the Foundation, and most importantly, a big win for the American Cancer Society and our local charities,” Aaron Zeigler, president & CEO of Zeigler Auto Group, one of the Foundation’s top supporters.

For the first time ever, the gala featured a Red Carpet Show hosted by Sam D’Arc and Ariah Daniels, and live-streamed on the @driveforlifeorg social platforms by Zeigler’s Driving Vision Podcast.

Also new this year was a unique photo-op: a replica of the Zeigler.com 77 x MSU Spartans Camaro from the Firekeepers Casino 400 race at MIS where Tucker and MSU head basketball coach Tom Izzo served as Co-Grand Marshals.

Other highlights of the night included a cocktail hour, silent auction, live auction; and the event’s main giveaway: 2022 Honda Accord or $30,000 cash, with James Sapienza announced as the night’s big winner. The raffle, which has become a tradition over the years, was made possible thanks to the generosity of Platinum Sponsor West Michigan Honda Dealers.

ABOUT THE DRIVE FOR LIFE
For four decades, the Drive for Life Gala has attracted the support of business leaders, sponsors and volunteers; bringing the Kalamazoo community together for an extraordinary night of charity.

Over the last few years, the charity event has counted on the ongoing support of presenting sponsors Zeigler Auto Group, Greenleaf Trust and Huntington Bank.

ABOUT ZEIGLER AUTO GROUP
Zeigler Automotive Group is one of the largest privately-owned dealer groups in the U.S. with 78 franchises across 35 locations in Wisconsin, Illinois, Indiana, and Michigan. Vehicle brands represented include all of the domestic and the majority of the imported manufacturers.

Founded in 1975, the organization employs over 2,300 people, ranking among the top 1% of automotive dealers in the nation with estimated annual sales of $2.2 billion for 2022. The family-owned and operated company is well known for its commitment to both customer service and employee satisfaction. Zeigler is regularly recognized as one of the Best and Brightest Companies to Work for in the Nation, also earning similar accolades in Wisconsin, Chicago, and Michigan.

Mel Tucker speaks at the 40th Annual Drive for Life Gala which raised over $2M for charity on Monday, September 12, 2022Big Ten Coach of the Year Mel Tucker was the Special Guest Speaker at this year’s Drive for Life Foundation Gala

Zeigler 77 x MSU Spartans replica at the 40th Annual Drive for Life Foundation Gala-raising over $2M for charityThe Zeigler.com 77 was wrapped with a MSU Spartans theme during the Firekeepers Casino 400 at MIS where Coach Tucker and Coach Izzo served as Co-Grand Marshals

Josh Bilicki and Aaron Zeigler on stage announcing the night’s big winner at the 40th Annual Drive for Life Foundation GalaThe gala held its traditional raffle of a new Honda Accord or $30,000 (courtesy of Platinum Sponsor West Michigan Honda Dealers), with James Sapienza named as the winner

The Red Carpet Event was sponsored by The Driving Vision Podcast and streamed Live across multiple social media platforms.Guest were interviewed live by Sam D'Arc and Ariah Daniels and shared some of their favorite moments of the Gala.