The Mint 400, also known as The Great American Off-Road Race, brings over 500 of the world’s top racers to Las Vegas on Sunday, March 10 to compete over 400 grueling desert miles. Craig Scanlon will try to become the first person to complete the "Mint 800", the unofficial handle for combining two Mint 400 races in two different classes on the same day. This unprecedented attempt will be documented in CHASING THE MINT, a video series that will chronicle his preparations while he simultaneously commands 4 Wheel Parts, the off-road industry’s largest accessory retailer. 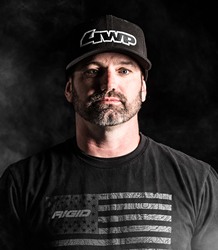 Competition – both in business and on the track – has been a huge part of my life for the past eight years. I'v​e learned that to be successful in either one you have to surround yourself with the very best people who are equally as committed. I am fortunate to have that.

The Mint 400 is renowned for its storied past and punishing profile. The desert race’s extreme terrain requires vehicles with suspensions that can cycle almost three feet of travel to handle speeds up to 140 mph on desert flats, over sandy whoops and through tight, rock-filled turns. Craig Scanlon, an experienced professional UTV race car driver, will attempt to complete the unofficial “Mint 800” on Sunday, March 10 with a UTV Pro class race in the morning followed by a Class 6100 Trophy Truck Spec race in the afternoon. The training and preparation promise to be nearly as tough as the races themselves. There’s just one hitch – Scanlon is busy with his “day job” as the president of an $800m global company.

CHASING THE MINT, a mini-documentary in development by the 4WP Marketing team will spotlight Scanlon’s attempt at The Mint 800 at the same time he’s running Transamerican Auto Parts (TAP Worldwide, LLC), the off-road giant whose reach extends to nearly a hundred 4 Wheel Parts (4WP) retail stores and top industry brands that include Pro Comp and Smittybilt.

The 3-part video series will be rolled out on the company's new content portal The Dirt by 4WP starting Monday, March 1 and will give an exclusive behind-the-scenes look at the preparations for such an endeavor. The Dirt by 4WP (http://www.4wp.com/TheDirt) was launched last month with the goal to provide enthusiasts a place to learn about and get inspired by the off-road lifestyle.

"As a lifelong fan of off-road racing, I love reading and watching stories that show you a side you normally don’t have access to,” said Joey DiGiovanni, 4WP Director of Creative Marketing and Partnerships. “What makes this really interesting is that beyond the racing, the day-to-day job of running one of the largest off-road companies never stops. Being able to capture this story has been a great experience.”

A new format change for the 2019 Mint 400 features two days of racing with both morning and afternoon sessions, opening up the possibility of competing in multiple pro level classes. Despite the logistical opportunity, the feat is audacious due to the sheer effort required to finish the course just once. Scanlon has been challenged to complete the course in previous attempts, but he is reinvigorated by an excellent result in the recent King of the Hammers UTV race and the chance to be the first to complete two full Mint 400 races in the same day.

"Competition – both in business and on the track – has been a huge part of my life for the past eight years,” said Scanlon. “The passion for both is hard for me to put into words, but I can say the challenges and experiences we face in the boardroom and behind the wheel have made me a better employee and driver.

“I've learned that to be successful in either one you have to surround yourself with the very best people who are equally as committed,” added Scanlon. “I am fortunate to have that and am very proud to represent all the great men and women of our company and on our outreach site The Dirt by 4WP.”

Scanlon is entered in the UTV Pro Turbo class in his #931 Scanlon Motorsports Polaris RZR XP4 Turbo and the 6100 Spec Truck class in the #6191 truck built by Rhys Millen Motorsports. He will be joined in the 6100 race by 4WP Official team drivers Sarah Price and Ted Moncure, the former making her first appearance at the Mint. Also entered in the 6100 race is RJ Anderson, a member of the 4WP Official family who will be participating in a partnership with Lunn Motorsports. The Scanlon Motorsports Group (SMG) will also take part in the popular Mint 400 Pit Crew Challenge, testing their mettle against the best off-road pit crews in the country.

In the UTV class, Scanlon will be competing against fellow 4WP Official driver Mitch Guthrie Jr., winner of the 2017 Mint 400 UTV Pro Turbo class, who is looking to redeem last year’s off-the-podium finish. Fresh off a win in the 2019 King of the Hammer UTV race, Guthrie Jr. is looking to reclaim his Mint 400 crown in a Polaris RZR XP Turbo.

More than 25,000 fans will line up in Primm, Nevada during Mint Week to watch qualifying runs for Spec Trucks and Trick Trucks prior to racing on Saturday and Sunday. Thursday and Friday will be highlighted by the Mint 400 Off-Road Festival on Fremont Street in downtown Las Vegas, where 20,000 fans can enjoy food and music, look over pre-race vehicles and get autographs from their favorite drivers. 4WP's Showroom on Wheels will be on hand both days at the Main Stage Lot of the contingency festival displaying the latest off-road accessories and offering special event-only deals.

"Being part of the off-road takeover of downtown Las Vegas is pretty special and is a fantastic time to interact with our customers, both new and old,” said DiGiovanni. “We can't wait to cheer on our solid team of 4WP Official racers of The Mint 400 or in the case of Craig … The Mint 800!"

ABOUT 4 WHEEL PARTS: 4WP is a powerhouse in the growing $10-plus billion Jeep and truck accessory market. A division of Transamerican Auto Parts (TAP Worldwide, LLC), and acquired by Polaris Industries Inc. in 2016, 4WP sells and installs an extensive line of industry-leading aftermarket parts and accessories for off-road enthusiasts through 94 brick-and-mortar stores in North America and online at http://www.4WP.com. More than 500 aftermarket auto brands are offered through 4WP, including off-road wheels, tires, suspensions, drivetrains, exterior/interior accessories, recovery equipment, lighting, electronics, replacement parts and gear for the outdoor/camping lifestyle.