An increasing number of Americans are seeking options for better living—long-term—beyond the U.S. borders, however to earn a living while away requires something beyond a tourist visa. A new report from International Living explores the top five European countries that offer the best freelance visas. 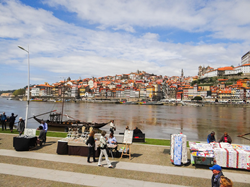 "This report addresses that. Because, frankly, that’s often the quickest and easiest way for the average American to gain permission to live and work legally in Europe."

“If you’ve paid attention to headlines in recent weeks, you’ll have likely seen all the many stories about Americans wanting to escape the US Covid crisis,” says Jeff D. Opdyke, editor of The Savvy Retiree, a publication of International Living. “Stories on how to seek second passports. Stories on countries where Americans are increasingly seeking information on emigration. Stories on certain countries and Caribbean islands aiming to attract Americans for a year abroad.

“What’s often missing amid all these many words is the story of how to live abroad for longer than a year without having to spending $100,000 or more buying a passport. For the fact is, a number of countries, particularly in Europe, offer ‘freelance’ visas specifically aimed at those who want to live and work in a particular country for the long haul.

“This report addresses that. Because, frankly, that’s often the quickest and easiest way for the average American to gain permission to live and work legally in Europe.

“Only a limited handful of European countries offer freelance visas. In most countries, you’ll need a job offer from a local firm, or you’ll need to work for a multinational will local operations that transfers you into a particular country. For most of us, that’s not an option. Instead, we have to look to countries that specifically welcome the independent, freelance worker.”

The report explores the five best countries to consider in Europe:

“I chose to pursue a freelance life two years ago in Prague, one of Europe’s most comfortable and picturesque cities, after careful consideration of other European destinations,” says Opdyke.

“Primary among those reasons is the fact that the Czech Republic offers what’s known locally as a Zivno, widely regarded as one of the best freelance-worker options in Europe.

"This isn’t a visa, and it not specifically targeted at foreigners. Instead, the Zivno is effectively a national registry of independent workers, whether they’re native-born Czechs or foreigners with long-term residence status. As such, applicants will need a long-residence visa to pair with the Zivno.

“But assuming you have marketable skills in something that allows you to earn income online or even locally – as, say, a language teacher,” says Opdyke, “you will likely obtain your Zivno and with that it is easier to qualify for a one-year, long-term residence visa, a stamp in your passport. Then, assuming you play by Czech rules (pay your taxes and the mandatory health and social security insurance – combined, about $200 a month, minimum), you’ll apply for and receive a biometric, long-term residence card good for two years and renewable for another two. After five years, you can apply for permanent residence/citizenship, if that appeals to you. (Note: Because the Czech Republic is part of the European Union, its passport is one of the five best in the world.)”

Prague, the capital, is a wonderful city to call home—folks are close to so much in terms of weekend getaways or longer trips. The lifestyle is relaxing. The city is eye-candy pretty much everywhere you go. And the food is great. A couple can live the good life there on a budget of $1,900 a month.

“Here, you want the Freiberufler, Germany’s self-employment visa,” reports Opdyke. “It’s not terribly difficult to obtain, so long as you jump through various paperwork hoops that exist – and Germany has lots of paperwork hoops, including revenue plans, letters of intent or contracts from potential or existing clients, and various other documents.”

Folks will also need to prove income sufficiency, which generally means at least €5,000 (just over $5,900) in a (preferably) German bank account.

A Freiberufler is good for six months to three years, depending on the application, and it’s renewable. The primary challenge is that an applicant will (probably) need to prove he or she has German freelance clients. Once armed with the Freiberufler, should a freelancer ultimately want permanent residence in Germany, it’s possible to apply after eight years.

Germany offers an excellent standard of living, with good infrastructure and quality healthcare. However, Germany’s cost of living tends to be higher than the European Union average. A monthly budget for a couple living in a suburban area, close to Munich, runs $3,610 to $4,160.

The autónomo is what freelancers pursue in the land of sangria.

“The process, while not especially difficult, can be lengthy – taking upwards of six months to complete, which means a 90-day tourist visa for the Schengen Zone (of which Spain is a member) will often expire before you receive your autónomo,” advises Opdyke. “So, you need to plan for that by completing as much of the process as you can outside of Spain. Conversely, as your 90-day limit approaches you can hop across to a non-Schengen country such as Ireland or the UK for a few weeks or months to stop your Schengen clock from winding down.”

The autónomo is identical to the Czech Zivno in that it’s good for one year. An applicant can apply for two, two-year extensions, and after five years of surviving on tapas, then, apply for permanent residency/citizenship if he or she wishes to remain in Spain as a naturalized citizen eligible for an EU passport.

Granada, overlooked by the snow-capped peaks of the majestic Sierra Nevada, is a timeless city of many layers, many people, and many stories. The city is quickly gaining ground as a top choice in Spain—the climate and weather of Granada justify why so many peoples have sought to be here. And the nearly 500-year-old University of Granada plays a major role in the city’s youthful vibe. Here a couple can live well on a monthly budget of $2,476.

This is, perhaps, the easiest freelance/self-employed visa to pursue in the EU, which makes it quite popular for those seeking a visa that allows for both long-term residence and permission to earn a living in Europe.

There are two options:

“Under Portugal’s ‘non-habitual residency’ program,” says Opdyke, “income generated outside of Portugal for certain types of ‘high-value’ activities is eligible for a tax exemption, meaning you pay no local taxes (you will still owe self-employment taxes to the States, and, potentially, personal income taxes, depending on how much money you earn living abroad).

Permanent residency/citizenship rules in Portugal follow the Spanish and Czech model in that you can apply after five years.

Porto, the second-largest metropolitan area in Portugal after Lisbon, is an increasingly popular city amongst digital nomads. Porto is a living, breathing picture-postcard of European charm, with plenty to see and do. There’s a proverbial banquet of exciting activities, from historic city walks to wine tastings across the river in Vila Nova de Gaia’s wine caves. But best of all, it’s good value. A couple can live well here on a monthly budget of $1,550.

“France’s entrepreneur/profession libérale visa is similar to Portugal in terms of ease of attainment,” says Opdyke. “It’s an ideal way for Francophiles to gain legal permission to live and work in France.

“You need to demonstrate that you can fend for yourself financially by proving you earn at least the French legal minimum wage (about €1,540 per month, or $1,800). Beyond that, there are typical documents and whatnot that are necessary for the application, but nothing particularly difficult.”

And despite widespread misconceptions about cost of living in France, outside of Paris the country is a pretty affordable place to call home.

Given its ideal placement along the French Riviera, the coastal city of Toulon in southeastern France provides an idyllic lifestyle for residents and short-term visitors. Away from the hustle-and-bustle of big “resort” towns like Nice, Cannes, and St. Tropez, unassuming Toulon lies a bit off the radar. A couple can live well here on a monthly budget of $1,986 to $2,228.

The full report, including information on a bonus country, The Netherlands, can be found, here: 5 Best Freelance Visas in Europe.