A new report from the editors at International Living details five smaller, lesser-known cities around the world where it’s possible to retire well for under $30,000 a year. The places offer a culture-rich lifestyle, excellent infrastructure, and top-class dining and entertainment—starting with a budget as low as $1,000 a month. 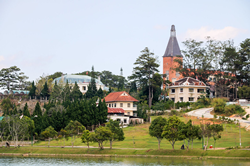 “When it comes to a comfortable and affordable retirement, smaller cities can provide a good option—when they offer the vitality of a cosmopolitan lifestyle, but without the crowds or high costs of big-city life,” says Jennifer Stevens, Executive Editor, International Living.

“When it comes to a comfortable and affordable retirement, smaller cities can provide a good option—when they offer the vitality of a cosmopolitan lifestyle, but without the crowds or high costs of big-city life,” says Jennifer Stevens, Executive Editor, International Living.

“From our full list of 75 towns and cities that are worth your attention—all in countries that make our Annual Global Retirement Index—we’ve highlighted five small cities where an expat community already exists, you have access to sound and affordable medical care, the climate is comfortable, and the lifestyle offers attractive diversions—from beaches to great arts offerings. And, in all, the cost of living is low while the quality of life is high.

“In the U.S., it’s certainly possible to survive and—in certain rural locales, live comfortably—on a decidedly modest income. But you’re not going to be living at the beach, eating out multiple nights a week, enjoying great theater or concerts. That’s what you gain in the best-value locales overseas—you gain a higher quality of life on that same modest budget.”

The 5 smaller cities highlighted below are all places where a retiree can live better for less, enjoy a measure of adventure in retirement, and afford the sorts of luxuries like travel, dinners out, even a gardener or housekeeper that only wealthier folks can afford to bankroll at home in the States.

The five smaller cities identified come with a price tag to suit all budgets—from as little as $1,000 a month—and are in Europe, Latin America, South America and Southeast Asia:

The southwestern area of France, and particularly Toulouse, is a very attractive option for retirees. Not only is France known for its high standard of living and quality healthcare system, but it also offers myriad activities for its residents; cultural, gourmet, intellectual pursuits, hobbies and crafts, and sports to name a few.

Located halfway between the Atlantic and the Mediterranean Sea, and a stone’s throw from the Spanish border, Toulouse has a very open and lively culture, typically hosting some 1,000 events on average every year. There’s always a good excuse for a “fiesta”, and given that the city is a foodie-destination par excellence, a lot of the town’s social life centers around gourmet activities. (Of course, COVID concerns put some on hold this year, but the usual celebrations will be back.)
Residents take pride in their regional products and wines, and Toulouse boasts 11 Michelin-star restaurants.

Corozal (population 10,287) is continuing to gain popularity among expats and native Belizeans. An active community of expats lives full-time in the Corozal District, with the numbers swelling during the winter months. In fact, it may be the most popular destination in Belize for expats who like the idea of Caribbean living but need to live frugally on their retirement pensions or savings. Costs here are low and amenities are plentiful. The official language of Belize is English, which makes it an easy place to settle down.

The city and surrounding area have many visible links with the past. Corozal Town was built on the foundations of a Maya ceremonial center (now called Santa Rita), and many of the old buildings are constructed of stones pillaged from the ruins of Santa Rita. Corozal also has a pretty main square and, thanks to its proximity to Mexico, feels a bit more Latin than some other parts of Belize.

One big draw is its location on the Bay of Chetumal, which locals usually refer to as Corozal Bay. Water in the bay tends to be a darker green than the turquoise of the Caribbean. But it’s ideal for fishing, sailing, and swimming—and expats here do all three with enthusiasm. There’s also a green parkland along the bay-front (malecón), with plenty of beautiful water views.

Corozal offers a laid-back Belizean lifestyle, full of Caribbean beauty, charm and ambience, making it an excellent prospect for people who want to live near the water and enjoy year-round sun. Plus, with Mexico just 9 miles away, it’s easy to hop up there for good medical care and more shopping options.

Like so many cities in Portugal, Braga’s (population 136,885) history was influenced by Roman occupation, and the city’s architecture and landscape vividly recall those ancient days.
Braga is the seat of the oldest Portuguese archdiocese of Roman Catholicism. Churches, chapels, and convents abound. And, as in most major and in even minor cities in the country, grand fountains and statues punctuate its thoroughfares.

The University of Minho adds diversity to the populace as well, with Erasmus students coming from all over Europe and the Far East.

That youthful influence gives a lift to an otherwise very traditional city, and many of the younger locals speak passable English. This, and the fact that many shopkeepers and restaurant owners cater to tourists, makes Braga an easy spot for expats to adopt as their own. It seems to go under the radar, but as the third-largest metropolitan area in the country, it has much to offer.

Living here means doing what you want, indoors and out, virtually all year round. The climate is moderate. In summer, temperatures average around 69 F, while in winter that falls to around 47 F. December is the wettest month, with rainfall of about seven inches—similar to nearby Porto’s.
In Braga, a couple can live well on $2,050 a month.

About a third the size of Cuenca, Loja (population 180,617) feels like a small U.S. Midwestern city. It is located in one of Ecuador’s southernmost provinces that borders Peru and is recognized for its cleanliness and its attractive parks, rivers, and churches. It’s popularly known as “The City of Music,” though Lojanos prefer “The Music and Cultural Capital of Ecuador” since they also have a strong tradition of art and literature.

Though often overlooked—most Ecuadorians haven’t been there, despite the fact that it is one of the country’s oldest and most historic cities—it’s worth consideration as an excellent-value retreat. The colonial center is tidy, and there is an abundance of shady plazas and parks in which to while away the hours.

Expats in Loja are also made to feel very welcome in their new home, with many remarking on the kindness and friendliness of the locals.

Prospective expats intrigued by the low cost of living in Vietnam but not keen on living in a hot climate should consider Dalat, a relatively small city (population 425,000) surrounded by mountains, waterfalls, and pine forests high in the southern part of the lofty Central Highlands.

Dalat was originally developed by the French in the early 19th century as a cool-weather retreat from the steamy plantations and cities of the lowlands. It’s an attractive place, full of parks, lakes, and flowers. Many of the buildings in the city showcase that early French colonial style, while others are designed like Swiss chalets.

It’s known as “the City of Flowers,” and you’ll see them everywhere you go—on nearly every street and on display in every city park. Flower fields outside of town stretch into the distance, bursting with the radiant colors of lilies, chrysanthemums, and roses.

Here, two people can live comfortably on a budget of $1,000 per month or less.

More information on 75 of the best towns and cities for retirement around the world in 2020 can be found, here: The World’s Best Towns and Cities for a Low-Cost Retirement