71 Year Old Houston Bakery Celebrates with Determination to Survive Another Disaster and Gives Back to Others with Mitzvah Good Deed Funds and $.71 Cookies

Three Brothers Bakery will celebrate 71 years by working hard to survive one more disaster, giving back by feeding others, offering 71¢ cookies at their Braeswood store on May 8, 2020 and thanking the SBA for saving the bakery for a third time. 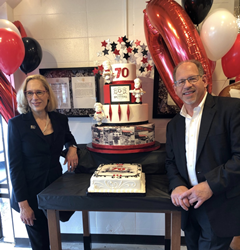 Who knew the SBA would save Three Brothers Bakery for a 3rd time as it approached its 71st anniversary? "What a difference a year can make," said Bobby Jucker, co-owner.

"Early on we realized if we can sell 10,000 pies, 1 pie at a time, our entire bakery ecosystem will benefit. Jobs at the bakery would be saved and our suppliers would benefit as well. There is a domino effect trickling down" said Janice Jucker, bakery co-owner.

2019’s 70th anniversary celebration for Three Brothers Bakery was quite a day beginning with being awarded the SBA’s Family Owned Small Business of the Year for the Houston District, a visit from the SBA’s Regional Administrator and District Director, and VISA, the sponsors of the SBA Small Business Week plus celebrating with the bakery’s larger, supportive community. The celebrations came with federal, state and city recognitions.

Fast forward one year later and who knew then that the SBA would be saving their business with a PPP loan approaching their 71st anniversary?

For the third time in its history, the SBA is saving Three Brothers Bakery with a loan program – 1st with a disaster loan after Hurricane Ike, 2nd with disaster loans after Hurricane Harvey and this year with a PPP loan enabling the bakery to survive the economic downturn associated with the COVID 19 pandemic.
"After surviving 4 floods, a fire and a hurricane we are experts at small business disaster recovery, but this one has been absolutely the hardest economically; what a difference a year can make," said Bobby Jucker, co-owner Three Brothers Bakery.

"Early on we realized if we can sell 10,000 pecan pies, 1 pie at a time, our entire bakery ecosystem will benefit. Jobs at the bakery would be saved and our suppliers would benefit as well. There is a domino effect trickling down to the box maker, the pecan grower, the bakery supply house, our printer and more," said Janice Jucker, bakery co-owner.

While this year there will be no cake or large celebration, Bobby and Janice Jucker, co-owners of Three Brothers Bakery, will be commemorating the special day at their Braeswood location with cookies for 71¢ each*. Additionally, they have created Mitzvah Funds and are encouraging their loyal following to donate $7.10 to commemorate the special day. Mitzvah is Hebrew for Good Deed. After receiving some media attention for their struggles to survive yet another disaster people began sending them money to use to bake for others in need and helping keep their team employed. After receiving a number of “donations” plus a grant from the Texas Restaurant Relief Fund, sponsored by Spoetzel Brewing, the makers of Shiner Beer, the Juckers decided to formalize a program. The donations help keep their team working, feeds those in need and the Juckers give those supported a wholesale discount, which allows the funds to feed even more. Those the Mitzvah funds support are: