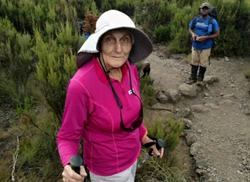 Anne Lorimor on her record-breaking climb of Mount Kilimanjaro. Photo by James Poremba.

Five years ago, Anne Lorimor of Paradise Valley, Arizona climbed Kilimanjaro to become the oldest woman to summit at age 85.

However, that record was overtaken just a few months later by Russian Angela Vorobeva who climbed the mountaint at age 86.

Then in 2017, the world record for the oldest person to climb Kilimanjaro was broken by Dr. Fred Distelhorst, who was 88 years old.

Not to be outdone, on the morning of July 18, 2019, Lorimor re-claimed her title as the oldest woman and also became the oldest person to climb Kilimanjaro by successfully reaching Uhuru Peak, the summit of Mount Kilimanjaro.

Kilimanjaro is the highest peak in Africa and also the tallest free standing mountain in the world. The mountain stands 19,341 feet above sea level.

Climbing Kilimanjaro does not require technical mountaineering skills, but does require excellent physical fitness and mental strength. People who are successful in reaching the top must be conditioned to hike on steep terrain and in inclement weather for extended periods of time.

There are several established routes which typically require between five and nine days round trip. Lorimor climbed Kilimanjaro on the remote and beautiful Rongai route, which her guide service Ultimate Kilimanjaro describes as a “moderately difficult route” in “true wilderness.”

The biggest obstacle when climbing Kilimanjaro is the extreme altitude. At high elevation, there is less oxygen in the atmosphere which can lead to altitude sickness if the body fails to adapt. Serious cases of altitude sickness can be fatal.

Due to this, many safety precautions were put in place to prevent, detect and treat altitude sickness. Lorimor’s guides, who are certified Wilderness First Responders, carried bottled oxygen and a portable stretcher in case of emergency.

Lorimor’s record-setting feat did not come without its challenges.

“There was a point when I really was concerned because I fell before I started up the mountain,” said Lorimor. “I had great pain in my side, and I couldn’t take deep breaths.”

The mountain crew conducted daily health evaluations which included measuring heart rate and oxygen saturation levels to ensure Lorimor was strong and healthy. She passed with flying colors each day until they neared the summit.

Elibahati Mamuya, lead guide for Ultimate Kilimanjaro, recounted the situation. “She was quite strong on the climb. But at one point she had lower rib pain and was breathing heavily,” Mamuya said. “We were watching carefully.”

However, after taking some rest Lorimor felt better and her breathing improved. Her grit and determination got her to the top.

The final leg of the climb was an arduous 5,000 ft. elevation gain that took her 12 long hours to complete. Lorimor’s positive, can-do attitude was noticed by everyone around her.

Mamuya said, “Anne knew from the very first day that she would make it to the summit. She is a very special person and it made me happy to be with her on her journey. I was very impressed.”

Lorimor hopes that her achievement will help to inspire others. Her personal mission is to give back to underserved children and youth.

As a child, Lorimor grew up very poor during the Great Depression. Her and her nine siblings were homeless for a time and lived in a tent. She was able to attend boarding school because a generous teacher saw potential in her and paid her tuition.

With the intent of paying it forward, Lorimor created a non-profit organization called Creating Exciting Futures (https://www.creatingexcitingfutures.org) to empower and benefit at-risk youth.

“I show kids their options and give them the tools to grow and lead productive lives,” she said.

Anne and the team trekking on Kilimanjaro. Photo by James Poremba.

Anne celebrates her success on the mountain. Photo by Greg Homer.

Anne in her hometown of Paradise Valley, Arizona. Photo by Anne Lorimor.

Anne on the summit of Kilimanjaro. Photo by James Poremba.

Anne stands above the clouds at 14,000 feet. Photo by Dan Gluck.