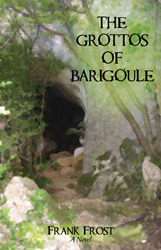 At 90-years-young, I’m traveling the world and telling stories...

In 1545, the Merindol Massacre occurred in southern France, killing thousands of “heretics,” including 25 women and children hiding in the secret grottos in the hills above a town in Provence, during the “Wars of Religion.”

In “The Grottos of Barigoule,” Frank Frost weaves a compelling fictional thriller about a curse, resulting from the massacre, which tests the efforts of two American couples and a French detective, trying to solve the mystery of a secret cave in the seemingly placid village.

“My wife and I bought an old, stone house in Provence in 1999,” Frost said. “We soon discovered that our village had been massacred, almost five centuries prior, and that the beautiful hills of our picturesque French village held a dark past.”

Frost, 90, received his PhD in history from UCLA and taught at UC Santa Barbara for 35 years, with visiting appointments at UC Berkely, Princeton and the University of Haifa. He has published four scholarly books and dozens of articles on Greek history and archeology. His book, “Greek Society,” paid a royalty for 45 years, through five editions. He is also a professional jazz pianist and currently makes regular appearances at California clubs and restaurants.

“At 90-years-young, I’m traveling the world and telling stories,” Frost said. “I can’t think of a better way to spend my best year yet!”

About the author
Frank Frost is a Professor Emeritus of Ancient History and Archaeology at the University of California Santa Barbara. He is also a cook, a professional jazz pianist, former rugby player, and a prolific non-fiction writer. The Los Angeles Times Book Review listed his novel, “Dead Philadelphians,” among the best fiction of 1999: “Wonderfully taut, flexible prose, not a word wasted…a compulsive page-turner.” His last book was “Gershwin’s Last Waltz and Other Stories.” Frank and his wife, Amanda, split their time between Santa Barbara, Calif., and their home in Provence, France, where he is compiling a cookbook. To learn more about the author and his book, please visit: https://www.archwaypublishing.com/Bookstore/BookDetail.aspx?BookId=SKU-001234821.