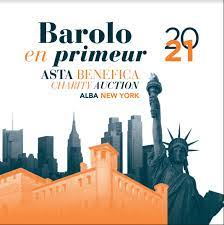 This event represents a successful synergy between the supremacy of Italian wine and the en primeur method, for the first time in Italy.

The first-ever Barolo en Primeur successfully raised over 600,000 euro for various international nonprofit organizations during the inaugural edition of this unique event held on October 30th, 2021 at the Grinzane Cavour Castle in Italy. Hosted by the Cassa di Risparmio di Cuneo Foundation, in conjunction with the CRC Donare Foundation and the Barolo Barbaresco Alba Langhe and Dogliani Consortium, the event attracted an international audience of bidders, streaming live to New York, as they auctioned off 14 barriques of Barolo Gustava from the 2020 vintage.

A bid of 50,000 euro was given to the Adas Foundation, a nonprofit organization that provides pain management, psychological support, and palliative care at home. This foundation was matched with barrique No. 10, for which world-renowned wine critic and Founder of Vinous, Antonio Galloni says is, "one of the most interesting wines in this auction; a classic Barolo from the Grinzane area, featuring floral, spicy notes and red berry fruit, a medium-bodied structure and wonderful energy and finesse." The most generous bid of the night was for 140,000 euro placed on the only tonneau in the line-up, a large wine barrique equivalent to approximately 600 bottles of the Barolo del Comune di Grinzane Cavour 2020, which was unexpectedly added at the end of the auction by vice-president of the Cassa di Risparmio di Cuneo Foundation, Ezio Raviola.

Bids for the fifteenth barrique will be collected on November 14th, 2021 during the World White Truffle Auction at Grinzane Cavour Castle, and will stream live to Hong Kong. The donation will go to the international charity "Mother's Choice," which has been working to help orphaned children and young mothers in difficulty since 1987.

Ezio Raviola, Vice-President of the Cassa di Risparmio di Cuneo Foundation, commented on the recent charity event: "The success of Barolo en Primeur is a source of great satisfaction for the Fondazione CRC, thanks to a collaborated effort in our local area. Having involved extremely prestigious ambassadors of both wine and art, we have created a unique initiative, capable of linking a product like the internationally renowned Barolo with projects of great social value. As of today, we are looking forward to the 2022 edition which will introduce new features that will further enhance this initiative".

Matteo Ascheri, President of the Barolo Barbaresco Langhe Alba Dogliani Consortium, added, "The Barolo en Primeur charity event, made possible thanks to the CRC Foundation project, was fundamental in establishing the Barolo appellation on the world stage. Barolo, already appreciated beyond our region thanks to the relentless work of its producers, was donated for the first time in Italy in the 'en primeur' style. As a consortium, we are committed to involving the producers of the Langhe for the next edition of Barolo en Primeur to make its presence felt even more on the international stage."

In addition to Italy, this project was promoted in the United States, Germany, Switzerland, and the UK, in association with the Langhe Monferrato Roero Tourist Board, the organization responsible for the Global Conference in Wine Tourism in Alba in September 2022.

This event represents a successful synergy between the supremacy of Italian wine and the en primeur method, for the first time in Italy. The auction involved several great experts of the international world of wine, such as Donato Lanati and the Laboratorio ENOSIS Meraviglia, responsible for the entire wine-making process, and Antonio Galloni, who hosted the auction simultaneously from New York. Galloni associated each barrique with an NFT (Non-Fungible Token), a digital certificate of authenticity guaranteed via blockchain. Barolo en Primeur is set for its second edition next year, and again for years to come. With a close personal involvement of the Barolo producers, it is sure to become a must-see international event for wine enthusiasts, collectors, and benefactors alike.

Following the mandatory aging period in January 2024, the approximately 300 bottles from each barrique will be numbered and adorned with a label created exclusively by Italian artist, Giuseppe Penone. The work of art by the artist and sculptor is an unprecedented drawing of a vine leaf together with a human hand; a visual synthesis expressing the deep relationship between the wine and its creator, conveying the core elements for making a masterpiece: intelligence, courage, and love.

Among the beneficiaries of the Barolo en Primeur auction event are: the East-West Philanthropic Forum (EWPF), a project of education through art and the search for gender equality in China; the intercultural collaboration platform promoting the issues of climate change, conservation, sustainability, education, women's leadership; a not-for-profit project aimed at acquainting children and families with contemporary art and sustainability promoted by the Rivoli Castle Museum of Contemporary Art; the restoration and valorisation project of the 17th century Cantinone of Villa Arconati located on the outskirts of Milan by the Augusto Rancilio Foundation, an organization dedicated to the study and research in the fields of Architecture and Design; the promotion and recovery of traditional knowledge and the landscape of the Alta Langa by the Alta Langa Cultural Park, a non-profit organization for the promotion of the Alta Langa aimed at fostering the socio-economic, cultural and tourist development of the area; the Thesaurus Monviso project, which aims to regulate the commitment of young people in the socio-cultural and environmental spheres in the area of the Monviso Valleys, implemented by the b612lab Association of Saluzzo, an international organization for the promotion of youth policies, and finally Opera Pio Barolo.