#LightUpMBC Shines a Light on the Importance of Awareness and Funding For Metastatic Breast Cancer with Over 115 Landmarks Worldwide Illuminated in Green, Teal and Pink

METAvivor Research & Support is teaming up with Moore Fight Moore Strong to host #LightUpMBC in honor of MBC Awareness Day, October 13. Tune-In October 13 at 8 p.m. EST for #LightUpMBC Live on @METAvivor Facebook Live and http://www.metavivor.org for a virtual evening of inspiration and entertainment. Participate in the #LightUpMBC social media challenge by publicly sharing a photo of a friend who lights up your life 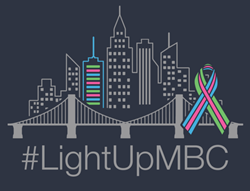 “An estimated 42,170 Americans will die from metastatic breast cancer (MBC) in 2020, the equivalent of 115 women and men per day,” said Laura Inahara of Moore Fight Moore Strong. “The 115 landmarks that will illuminate this year represent the 115 lives lost every day to MBC in the U.S. alone.”

To address this, on October 13, Metastatic Breast Cancer Awareness Day, over 115 landmarks in all 50 U.S. states as well as Canada and Ireland will light up in the MBC symbolic colors of green, teal and pink as part of the #LightUpMBC campaign. Iconic locations include One World Trade Center, NYC, The Memorial Bridge in Portsmouth, historic Ford Field in Detroit, Cleveland’s celebrated Rock & Roll Hall of Fame, and the majestic Niagara Falls.

To view the illuminated landmarks across the globe, #LightUpMBC Live, a virtual benefit, will take place on October 13 at 8 p.m. EST on @METAvivor Facebook Live and http://www.metavivor.org. The virtual event will feature inspiring MBC stories heard from #LightUpMBC patient ambassadors at landmark lightings in their cities to help raise funds for metastatic breast cancer research. Musical performances will include John Rzeznik of the Goo Goo Dolls and David Bryan of Bon Jovi, who is also a Tony Award winner of the Broadway musical “Diana”.

METAvivor President Jamil Rivers says, “Metastatic breast cancer (MBC), also known as stage 4 breast cancer, is not curable and means the cancer cells have left the breast and spread to other parts of the body. There is a lack of knowledge on MBC in comparison to early stage breast cancer, which leads to many widespread misperceptions.”

“An estimated 42,170 Americans will die from MBC in 2020, the equivalent of 115 women and men per day,” said Laura Inahara, Executive Director of Moore Fight Moore Strong. “The 115 landmarks that will illuminate this year represent the 115 lives lost every day to MBC in the U.S. alone. We hope that #LightUpMBC will not only spread awareness and raise funds, but also inspire people to truly want to make a difference for people living with MBC.”

#LightUpMBC Social Media Challenge: Who lights up your life? METAvivor asks that people publicly share a photo and/or story of someone who inspires them by posting on their social media channels with the donation link: http://www.metavivor.org/LightUpMBC and using hashtags #LightUpMBC #METAvivor. By nominating friends to participate, you can help raise funds for MBC research.

Go to the website: http://www.Metavivor.org/lightupmbc to learn more about MBC, donate to this cause, and view a full list of participating landmarks.

METAvivor puts 100% of every donation toward stage 4 metastatic breast cancer research. Dedicated to the specific fight of men and women living with stage 4 metastatic breast cancer, it is a volunteer led, 501c3 non-profit organization that exclusively funds stage 4 MBC research with the goal of transitioning it from a terminal disease to a chronic condition with a good quality of life for patients.

The Origin of the MBC Ribbon: The pink ribbon is well-known for representing the fight against breast cancer but MBC patients feel invisible and forgotten in the pink ribbon campaigns. To highlight the uniqueness of the disease and show its commonality with other stage 4 cancers, METAvivor designed a base ribbon of green and teal to represent metastasis. Green represents the triumph of spring over winter, life over death, and symbolizes renewal, hope, and immortality while teal symbolizes healing and spirituality. The thin pink ribbon overlay signifies the metastatic cancer originated in the breast.

About Moore Fight Moore Strong
Moore Fight Moore Strong (MFMS) was formed in 2013 by family and friends who joined forces with a mission to support Jessica Moore who was diagnosed with stage 4 metastatic breast cancer (MBC) at the age of 32 and passed away 4 years later. MFMS supports Jess' vision to shine a light on stage 4 MBC through a campaign called #LightUpMBC by partnering with landmarks to illuminate in the symbolic MBC colors of green, teal and pink. All proceeds raised through #LightUpMBC benefit METAvivor Research and Support.