#MeToo Movement Founder Tarana Burke to be Given an Award in her Name by Town Clock CDC at Inaugural Being Brave Event, an Evening Honoring Survivors of Domestic Violence

Lisa Guerrero, Inside Edition, to host; Tarana Burke, founder #MeToo Movement, to be honored at the inaugural Being Brave Event organized by Town Clock Community Development Corporation. The November 8th star-studded celebration in New Brunswick, NJ, will honor survivors of domestic violence through song, dance and spoken word. Town Clock CDC is the largest facility of its kind in NJ, only one of 40 in US that provides permanent housing and supportive services to survivors. 57% of homeless women cite domestic violence as the cause of their homelessness. 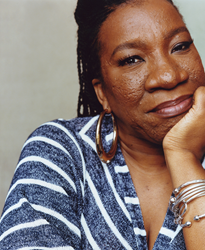 I am honored to be part of Town Clock’s movement to create safe havens for women and children who are fighting for their lives by escaping the dangers of domestic violence.

A star-studded cast will come together for Being Brave – An Evening of Honoring Survivors at the Nicholas Music Center, New Brunswick, NJ, on Friday, November 8, 2019, 8 PM. The event is designed to honor women who pursue safety, wholeness and new lives and support them with permanent, affordable housing.

“Everyone deserves a safe place to call home, a life free from violence. Stable housing is the leading catalyst to life improvement and change. At Town Clock, we honor the decision our residents made to escape their abusers and give themselves and their children a chance at a safe and secure life,” says Reverend Susan Kramer-Mills, executive director of the Town Clock Community Development Corporation (TCCDC). Susan Kramer-Mills Video Quote

Largest in NJ, 1 of 40 Nationwide
Town Clock CDC’s facility transformed the sanctuary of the 200-year-old First Reformed Church of New Brunswick into 10 supportive, long-term affordable housing units for survivors. It is one of only 40 establishments of its kind in the entire United States. When the facility opened in April 2016, it instantly became the largest, permanent housing program for survivors of domestic violence and their children in New Jersey.

“Thousands more units are needed throughout the US. Our goal is to replicate our model by working with other organizations and creating at least two facilities in every state,” says Kramer-Mills. “We hope that Being Brave will shine a national spotlight on this national crisis/shortage and enable us to create the affordable, permanent, and supportive housing so desperately needed by survivors of domestic violence.”

Being Brave Event & Award
Lisa Guerrero, Inside Edition’s award-winning, internationally known, chief investigative journalist, will host Being Brave. “I am proud to host the Being Brave Event and team up with Town Clock to honor survivors of domestic abuse. What could be more brave than a woman escaping her abuser for a forever home?” says Guerrero. Lisa Guerrero Video Quote She will be joined by Tarana Burke, founder of the #MeToo Movement and social justice activist. Grammy Award-winning singers, The American Repertory Ballet Company, politicians and other notables will highlight – through song, dance and spoken word – the challenges and triumphs of survivors seeking a forever home.

Tarana Burke will be the first recipient of the Tarana Burke Being Brave Award for outstanding leadership in breaking the cycle of abuse. “I am honored to be part of Town Clock’s movement to create safe havens for women and children who are fighting for their lives by escaping the dangers of domestic violence. I am humbled to receive this award and lend my name in support of women and children seeking new lives. To have a safe place where you can get help and not be alone is critical to dignity and survival,” says Burke.

She adds, “Town Clock is proof that we are stronger together, that survivors can break the cycle of violence by doing things big and small every day.”

Tarana Burke
For more than 25 years, activist and advocate Tarana Burke has worked at the intersection of racial justice, arts and culture and sexual violence. Fueled by commitments to interrupt sexual violence and other systemic inequalities disproportionately impacting marginalized people, particularly black women and girls, Tarana has created and led various campaigns focused on increasing access to resources and support for impacted communities, including the #MeToo movement.

Town Clock CDC
Town Clock Community Development Corporation is a nonprofit, 501(c)3 organization http://www.TownClockCDC.org. Our mission is to provide affordable homes and supportive services to survivors of domestic violence and their children. According to a Town Clock CDC resident: “Town Clock opens your mind to where you can sit…to be able to make plans now, I’m stable so I don’t have to worry about where I am going to live. I’ve been here a year so I feel comfortable now, so now let me start making plans towards the future.”