A blend of action, adventure, romance and horror await readers in ‘Onco III and a Half’ 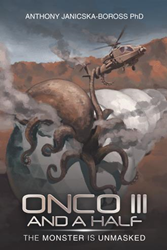 Published author Anthony Janicska-Boross, Ph.D., returns to the literary limelight with the release of “Onco III and a Half” (published by Balboa Press AU), the fourth book of his bio-horror series portraying the imminent specter of planetary starvation and its consequences. In this continuing sci-fi thriller, a scientist and a security officer join forces to do everything in their power to save a living organism from becoming a weapon of destruction and a predator.

The planet is running out of food. In an attempt to end world hunger, a group of scientists have developed a product that is in itself alive. Though fully capable of fulfilling its designed purpose, this product — this entity dubbed Creature — is becoming intelligent and dangerous. Even worse, the government now sees its potential use as a biological weapon. When Colleen Sans, the scientist in charge of studying and training the Creature, and security officer Frank Vagyoczki learn of the government’s attempt to tame it, they escape and a chase ensues. Will they find a way to stay one step ahead of their pursuers and keep Creature from becoming a tool for destruction before it is too late?

A blend of action, adventure, romance and horror, “Onco III and a Half” translates a fictional story to the current reality. It reflects the increase of world hunger and the importance of developing next food for starving humanity, along with its inherent dangers.

To purchase a copy of the book, visit https://www.balboapress.com/en-gb/bookstore/bookdetails/780748-Onco-III-and-a-Half.

About the Author
Anthony Janicska-Boross, Ph.D., migrated from war-torn Hungary after the Second World War. He raised five children mostly by himself and managed the offshore construction of many oil gas platforms with a crew of 350 men around the world. Although he is now legally blind, Janicska-Boross continues to pursue his passion for writing. Originally a penniless migrant, he rose to senior management with major international companies. He has published three previous novels in the same series, a major autobiography, many papers for engineering companies, some poems and some newspaper articles.