A.C. Carruthers’s new book “Gay Marriage/Open Homosexuality: Right or Wrong?” is an impassioned diatribe against all aspects of homosexuality

Recent release “Gay Marriage/Open Homosexuality: Right or Wrong?” from Page Publishing author A.C. Carruthers is a clear statement of belief that homosexuality divides men and women and has no place in human society. 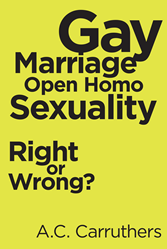 A.C. Carruthers has completed his book “Gay Marriage/Open Homosexuality: Right or Wrong?”: a vilification of laws allowing same-sex marriage in the United States and around the world.

Carruthers writes, “This book is about how homosexuality affects the life of humanity according to God’s law. It tells how America has made laws that are against God’s law. The Supreme Court has violated the law of God by saying it’s okay for two people of the same sex to marry. It tells that marriage cannot be redefined. It was established by God himself, built on a foundation for two—male and female only. It tells how marriage is like the Ten Commandments: it must remain as is. The Supreme Court can change man’s law, but not God’s law.”

Readers who wish to experience this work can purchase“Gay Marriage/Open Homosexuality: Right or Wrong?” at bookstores everywhere, or online at the Apple iTunes store, Amazon, Google Play, or Barnes and Noble.