In 2018, Thomaston Mills acquired Palmetto Finishing, located in Easley, SC. The plant has been revitalized with the addition of new and updated equipment and systems, and is now a first-class finishing unit, reaching out to the textile community to finish fabric or sell packages with the highest level of quality. With decades of experience in textile manufacturing in the USA. Thomaston Finishing now recycles 100% of its wastewater, so it can be used by local South Carolina farmers to irrigate its crops. 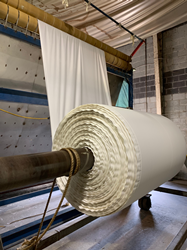 Thomaston Mills refused to yield to financial pressures and instead remained committed to U.S. manufacturing, to paying fair wages and to fabricating products in an Eco-friendly manner.

Thomaston, GA based Thomaston Mills, a producer of quality linens for the hospitality, healthcare and retail sectors since 1899, proudly announced today it has completed a major capital improvement project at the Thomaston Mills Finishing plant in Easley, SC. The plant, acquired by Thomaston in 2018, was formerly known as Palmetto Finishing and had been a division of Hanes Industries for many years. It has been revitalized with the addition of new, updated equipment and systems, and is now a first-class dyeing and finishing operation.

As consumers and corporations are recognizing the harmful environmental effects caused by cheap textiles with unsustainable supply chains, Thomaston Mills’ investment offers the market a change worth making. Bucking the mass exodus of the American textile industry in recent years to often environmentally damaging overseas facilities frequently characterized by inequitable labor standards as well, Thomaston Mills refused to yield to financial pressures and instead remained committed to U.S. manufacturing, to paying fair wages and to fabricating products in an Eco-friendly manner.

Remarks Tim Voit, Thomaston Mills Chief Marketing Officer, “Thomaston Finishing is committed to retaining these core values and taking them to another level. Dyeing and finishing is the most environmentally critical component of textile production. Much of the dyeing and finishing done in Asia is performed without wastewater or dye disposal controls and is powered by high-emission, unfiltered coal power plants. For decades, Thomaston Mills has kept their dyeing and finishing in the USA. In addition, Thomaston Finishing recycles 100% of its wastewater. In fact, the water output of our operation is continuously tested and deemed pure to a degree that federal and state environmental agencies certify and encourage us to partner with local South Carolina farmers to use our water for crop irrigation.”

Further, one historical complaint weighing against U.S. based producers until this day has been lackadaisical customer service and long lead times. Voit adds, “As a longtime customer ourselves of U.S. producers, we understand the critical importance of maintaining a high standard of quality without compromising fast turn-around and responsive top-notch customer service. It’s terribly frustrating to have to chase suppliers for lead time or other basic info, let alone to have promised lead time dates come and go. We are committed to being proactive and in delighting our customers with our service.”

Industry players who are seeking a more sustainable supply can confidently re-shore with Thomaston Finishing. Thomaston is an expert in fabric prep, in employing a wide variety of finishes, and in running both whites, lights and medium colors for the home furnishings & apparel trades in light & medium fabric weights up to 118” finished width. Please contact Tim Voit for more information on how to invest in long-term value with Thomaston Mills.