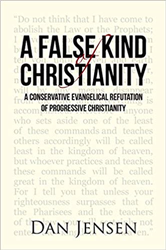 I am convinced that the church is on the precipice of a far greater controversy that took place with the Fundamentalist-Modernist Controversy during the early 20th century...

With his extensive background in theology, Dan Jensen offers the conservative Evangelical community a no-nonsense assessment of the growing and aggressive progressive Christian movement in his book “A False Kind of Christianity.”

“I am convinced that the church is on the precipice of a far greater controversy that took place with the Fundamentalist-Modernist Controversy during the early 20th century,” said Jensen. “I was inspired to write this book after many years of debating with progressive Christians in many different venues and from seeing the havoc that they are beginning to wreak.”

“A False Kind of Christianity” supports the conclusion that the progressive Christian is lacking a biblical foundation. Jensen makes it clear why this movement must be countered by conservative Evangelicals.

About the author
Dan Jensen graduated from Bethany College with a BA in Social Science and a minor in Biblical/Theological Studies. He later earned his first master’s degree from Reformed Theological Seminary and a Th.M. in Systematic Theology from the University of Aberdeen. Until very recently, Jensen was heavily involved in ministry work and, for a period during this time, was an ordained minister with the Evangelical Church Alliance. He labored in ministry work for around 16 years before deciding to focus on his calling as a theologian. Jensen currently resides in St. George, Utah with his four children. To learn more, please visit http://www.dan-j-jensen.com.