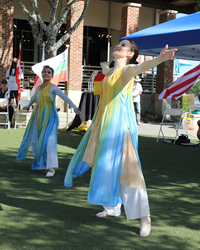 Dr Rachel Towns of Care for Women, and a third generation descendant of Holocaust survivors, dancing with Vera Alkhatib

"We choose this time as a clear sign against antisemitism and because the Holocaust is a powerful and painful reminder of what happens when good people remain silent about indifference and prejudice." - Rozalie Jerome

A little more than seventy-five years after the end of World War II, the number of living Holocaust survivors is naturally diminishing. Their stories are being recorded by museums and other institutions committed to remembering a particularly sordid chapter in history. “Why remember such heinous atrocities?,” we might well ask. However, the fact remains that failure to learn the lessons of history often results in repeating the same mistakes. Attempting to deny unpleasant or even abhorrent episodes in the lives of individuals or the history of nations does not remove the consequences of those painful periods.

The March of Remembrance is a memorial walk taken annually since 2007 on Yom HaShoah (Holocaust Remembrance Day) to commemorate Holocaust and Genocide Awareness month to “remember, reconcile and take a stand.” The March of Life (Remembrance in the USA) is an initiative by Jobst and Charlotte Bittner and TOS Ministries from Tübingen, Germany. Together with descendants of German Wehrmacht soldiers and members of the SS and police force, they have organized memorial and reconciliation marches at sites of the Holocaust all over Europe. Rozalie Jerome, President & Executive Director of the Holocaust Remembrance Association and State Director of March of Remembrance Texas says, "We choose this time as a clear sign against antisemitism and because the Holocaust is a powerful and painful reminder of what happens when good people remain silent about indifference and prejudice."

It was a very emotional afternoon, highlighted by Holocaust survivors and dignitaries. Holocaust survivor Bill Orlin, who lived on the run with his family from 1939 to 1945, shared his story of survival. Bill was born in Poland in 1932 and was seven years old when German troops invaded Poland.

Living on the run in Poland, Russia, Uzbekistan, Kazakhstan, Ukraine, Czechoslovakia, then Austria and eventually Canada, Orlin would pick up languages wherever he went. He finally made it to Houston in 1951. "I knew we had a lot of friends in the United States, but I didn't know that the President was one of them. But soon after we arrived, I received "Greetings from the President of the United States." Bill donned his veteran's hat and told the crowd that he was drafted and proud to serve. Ironically, he served as a translator in Germany during the Korean War. His moving account of his life focused not on the fact that he was a victim of the Holocaust, but that he was a survivor.

H.E. Gilad Katz, Consul General of Israel to the Southwest, spoke at the event about the importance to fight antisemitism in all forms and at any time and stressed the role of organizations like Holocaust Remembrance Association who seek to inspire the world to stand in solidarity against prejudice, persecution and indifference.

He was followed by Deputy Consul General Michael Ott of the German Consulate General in Houston, who spoke of being a 14-year-old student in Germany and visiting one of the internment camps. The signs in the camp were only in German, and several visitors asked him to translate. "As I read the words in English and watched the reactions on their faces, I knew that my life was forever changed," said Ott as his eyes filled with tears.

Ruth Steinfeld was born in Hameln, Germany in 1930. After her family was deported to the internment camp of Gurs in the French Pyrenees, Ruth’s mother, Anna, made the selfless decision to entrust Ruth, age 7, and her sister Lea, age 8, to a Jewish philanthropic organization called the Oeuvres de Secours aux Enfants (OSE). As they left the camp, Ruth and Lea never saw their parents again, as both perished in the Holocaust.

The two sisters lived first in a group home and later with a foster family in a small farming community in France. Posing as Catholics, Lea and Ruth were safe only until the villagers began to suspect their true identities. Ruth and Lea came to the United States in 1946 after their remaining grandfather, Jakob Kapustin, saw their names among a list of war orphans and brought them over.

Ruth had been hesitant to even discuss the Holocaust with her children. However, she later realized that others cared and wanted to learn. "The main message that I have learned through the years is forgiveness." In 1981, she faced her past by returning to Germany after a visit to Israel. After holding everything inside, she says, she had the powerful experience of forgiving. “Since that trip, I have felt like a new person. I don’t have any anger.” When she knocked on the door of her childhood home, an older German-speaking woman answered the door and invited Ruth inside. As she walked in, the two women began to cry, and they instinctively hugged each other.

When Ruth came to America, she says, everyone kept quiet. “If you had a problem, you were told not to talk about it. Silence is not the way to go. We have to talk. It’s important.” Ruth assumes that same responsibility as she continues to share her story at schools and organizations. As she finished speaking at the event last Sunday, she turned to Deputy Consul General Michael Ott of the German Consulate General in Houston and gave him a hug and a kiss on the cheek. The crowd cheered and tears filled many eyes.

The Kingwood memorial walk was a little short of a mile; families followed the route together, young and old alike, some carrying flags and all carrying a rock with the name and age of a child who was put to death during the Holocaust. (The rocks will be part of the 1.5 million stones that are being painted by volunteers from corporations, schools, clubs and churches throughout the area for the Holocaust Garden of Hope to be built at Kings Harbor.)

Simon Wellner, descendant of Holocaust survivors, along with Rev. Woody Woodward and other speakers, held Austin's first March of Remembrance event at the gate in front of the State Capitol on the same day. Next year it will be a march at UT Austin. Dr. Victoria Sarvadi, Executive Director of March of Remembrance Dallas, hosted an event in McKinney with name-reading of victims and a testimony by Holocaust survivor Tova Feldman. A larger event will be held in November in remembrance of Kristallnacht. Even amid worldwide Covid-19 restrictions, over 30 nations in 90 cities hosted March of Life/Remembrance events or marches on Yom HaShoah this year.

Chair Lynne Aronoff, Texas Holocaust and Genocide Commissionwelcomed the audience of over 300 attendees