The Tennessee Aquarium Conservation Institute has launched a new online database of scientific records and photos of more than 400 native fishes. This resource is now available to scientists and the general public. With a few clicks, anyone can discover which species live near them in more than 75 watersheds in eight states. 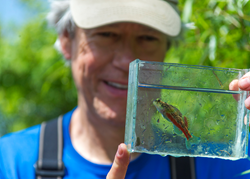 “We hope that FIN shows people how abundant the life beneath the surface is and gives them a sense of ownership and a desire to protect that diversity.” - Dr. Anna George, the Tennessee Aquarium’s vice president of conservation science and education.

Despite the unparalleled diversity of aquatic life in the Southeast, the millions of people who make use of the region’s rivers, lakes and streams may have no idea how many species they share the water with.

When it comes to inspiring others to protect the Southeast’s underwater rainforest, lack of awareness is a serious problem, says Dr. Bernie Kuhajda, the science program manager at the Tennessee Aquarium Conservation Institute.

“It’s hard to have a conservation mindset about aquatic animals if you don’t know anything about them, especially where they live,” he says. “We hope that once people learn about the cool things living in their backyard — or close by — they’ll become more interested in helping protect them.”

With the launch of the Freshwater Information Network(FIN), the Aquarium aims to help Southeasterners get to know the aquatic animals in their own neighborhood a little better.

FIN is a searchable database of scientific records, based on museum specimens as well as fish photos taken by citizens and scientists for more than 400 native fish species. Partners at the iCube at Tennessee Technological University helped create a website where users can search by specific address, watershed or species. With a few clicks, anyone can discover which fish have been found in more than 75 watersheds spanning eight states.

The database currently covers the biologically rich Tennessee, Cumberland, and Mobile drainage basins. This tiny region is home to 46 percent of the fish species found in the United and Canada, even though the area is just 1.4 percent of that vast landmass.

“We have an incredible number of species in our backyard, so many that freshwater biologists around the world are in awe of our waters’ riches,” says Dr. Anna George, the Tennessee Aquarium’s vice president of conservation science and education. “We hope that FIN shows people how abundant the life beneath the surface is and gives them a sense of ownership and a desire to protect that diversity.”

Development of the network was made possible by a 2015 grant through the Institute of Library and Museum Services’ Museums for America program.

In the past, scientists have relied on collections of preserved specimens housed at museums and academic institutions to serve as verified records of where a species has been found. FIN makes this information easily accessible and more efficient to update.

FIN facilitates sound science without impacting living populations by using photo vouchers, especially those of imperiled species. The network is accessible to the public. Users of the site are encouraged to submit photos of the fish they catch and where they were found. Each entry is reviewed by experts, and once a species is positively identified, a new record about the sighting will be added to FIN.

“From a technological standpoint, space in a museum is a confined building; it’s limited,” says Sarah Sweat, the geographic information systems analyst at the Tennessee Aquarium Conservation Institute who spearheaded the development of FIN. “As technology advances, digital storage has become less expensive and easier to buy, which makes something like FIN easier and more sustainable than jars on a shelf.”

The network is accessible to members of the public, and users of the site are encouraged to submit photos of the fish they catch and where they were found. Each entry is reviewed by scientists, and once a species is positively identified, information about the sighting is added to FIN.

For scientists, the network offers the means to keep track of freshwater science throughout the region. By knowing where research and conservation work is occurring, Southeastern academics are able to make the best use of the limited resources available to study and protect species in the region, Kuhajda says.

“The long-term game is to not only have better science but, even more importantly, better conservation of our aquatic resources,” he says. “The sooner you know where things are or where populations are declining, the sooner you can pull the fire alarm and raise awareness so people can rally and address a bad situation.”

Ultimately, FIN’s creators say they hope the site improves the work of scientists— both professional and citizen — and inspires the public to value the natural riches that surround them.

“I hope people learn more about what animals are around them,” Sweat says. “When we go out and do field work, we’ll share with landowners what we found in the creek or stream in their backyard, and many of them take pride in that.”

“I hope to inspire that more on a broader level that, ‘Wow, that’s something that’s really close to me’ so these species can stay here because people are aware of them and want to protect them.”

The Freshwater Information Network is accessible via https://tnacifin.com

A complete list of partners and collaborators is available online.