A Forgotten Brazilian Gem Brought Back into the Spotlight by SouthAmerica.travel

When Juergen Keller, CEO and Co-Founder of SouthAmerica.travel, first came to Brazil in 1988, the touristic highlight of the country was the state of Minas Gerais. This colonial, artsy heartland of Brazil has since been nearly forgotten due to mass tourism focused on Brazil’s coastline. Today, the goal of SouthAmerica.travel is to bring this forgotten gem back into the spotlight, with its Colonial Gems and Historic Cities Tour. On this 12-day adventure, travelers experience a variety of landscapes, from the sprawling urban capital of Belo Horizonte to vast art-inspired green valleys of Inhotim, baroque religious art in Congonhas, and the magnificence and colonial richness of the heart of gold mining, Ouro Preto. Finish your travels with the iconic sites of Rio de Janeiro. 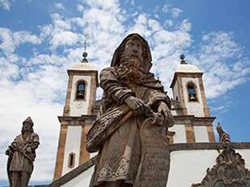 Sanctuary of Bom Jesus do Congonhas

“Knowing, studying, living, and working in Brazil since 1988, this route covers my favorite area of this vast country. It is the most colorful as well as the most diverse, combining beach and mountain, colonial history and modern arts.” - Juergen Keller, CEO and Co-Founder of SouthAmerica.travel

Belo Horizonte - “A Successful Experiment of Urban Architecture”
Begin in Minas Gerais’ vibrant capital. This bustling metropolis surrounded by mountains hosts bold modern architecture by Oscar Niemeyer in Pampulha, including the Chapel of São Francisco, Mineirão Stadium, the Municipal Park, the Afonso Pena Avenue, and the Liberdade Palacio, which is the head of government of Minas Gerais. Travelers should also enjoy the cosmopolitan streets of Savassi, the never-ending stalls at Mercado Central, the greenery of Central Park, and even the nearby colonial town of Sabará, time permitting.

Inhotim - “The World’s Largest Open-Air Art Museum”
Where modern architecture, modern landscaping, and modern art come together. Only an hour from Belo Horizonte, the incredible Inhotim Museum’s vast botanical gardens invite visitors to stroll through winding pathways surrounded by lush foliage and butterflies, to see art up-close. From small museums, each boasting a different modern style, full of artwork, video displays, and musical masterpieces to huge sculptures and iron structures on display in the open ground, Inhotim covers a wide range of modern art, sure to captivate any traveler.

Travel Tip: Entrance is free on Wednesdays! Note that during school vacation times, there may be too many people taking advantage of this!

Ouro Preto - “Minas Gerais’ Crown Jewel”
Once an influential gold mining town, Ouro Preto today is the shiniest colonial jewel in the crown of Minas Gerais. The city square is a presentation of Brazil’s first independence movement, with a statue to the movement’s hero, Tiradentes. While here, discover the oldest theater in the Americas, art galleries, museums, restaurants, and vistas of the rolling green countryside. Today, the university attracts a young crowd of students who fill the city with energy.

Congonhas - “A Fantastic Display of Aleijadinho’s Art”
In a valley framed by majestic mountains is the historical city of Congonhas. Congonhas boasts the essential works of baroque religious art and architecture, mainly Aleijadinho’s Sanctuary of Bom Jesus de Matosinhos. Be in awe of his soapstone carved statues of prophets and nearby wooden figures in the chapels showing “The Passion of the Christ.”

Tiradentes - “A Laid-back Quiet Baroque Oasis”
In the middle of this route, unwind in Tiradentes - a town known for its baroque architecture and charming atmosphere. Its picturesque setting of surrounding mountains and charming cobblestone streets make Tiradentes a walker’s haven — stroll by boutique shops, restaurants selling local delicacies, and long-standing churches. Tiradentes reputation is proven by the many galleries in town, showcasing an emerging vibrant art scene of painters, some of whom have exposed their work at galleries worldwide.

Petropolis - “A Summer Villa for the Emperor of Brazil”
Visit the Imperial Summer Palace, to where Emperor Dom Pedro II escaped from Rio during the hottest months of the year. Wander through the bedrooms, dining areas, hallways, and the grounds while getting an up-close look at family portraits, historical documents, and antique carriages.

Travel Tip: See the sites in the late afternoon to catch the sunset, and miss all the crowds.

Paraty - “The First Export Port of Brazil”
Paraty, on the coast between Rio and São Paulo, was left to its own devices until the 1970’s when the road from Rio was built to Paraty, at which time it was decided to leave the historical center untouched. Thus the city still exudes the charm and colonial architecture of the 1700s. In addition to its pristine beaches, Paraty is known for its yearly book fair and film festival and its exuberant Catholic holiday celebrations. While here, indulge in excellent restaurants of celebrated São Paulo chefs and schooner cruises with snorkeling opportunities off the Paraty coast. Time spent in Paraty is the perfect finish to the Colonial Gems & Historical Highlights of Brazil Tour.