Palm Beach Titans is all about having a winning tradition and playing good cricket, but the club also understands the need to invest in youth. After all, they are the future of cricket. Congrats to Riyadh, Adam, and Atul. May each of their cricket journeys mirror long well-constructed innings! 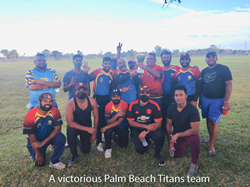 “Never in my recollection since the club’s inception in 1975 have youth players gone on to perform so well in the regional USA cricket trials”. - Ray Robinson President of Palm Beach Titans Cricket Club

Team members of Palm Beach Titans Cricket Club based at John Prince Park in Lake Worth, Florida, USA, collectively applauded the efforts of their youth players in the recent cricket trials in Tampa, Florida. Team President Ray Robinson, when asked, commented, “never in my recollection since the club’s inception in 1975 have youth players gone on to perform so well in the regional USA cricket trials”. That’s not to say that prior youth players did not have the requisite talent, in fact, former President Paul Ramkissoon commented, “while we have had many representatives in the zonal and USA teams over the years, since the early 2000s, the club has been blessed with an abundance of youth, and has made it its mission to foster that talent”. It turns out that several youth players over the years had successfully made the regional/ zonal U-15 and U-19 teams before, but this year marks the first time that the boys that made the list actually have an interest in playing cricket professionally.

As the old politically embroiled national cricket body gave way to the ICC taking a firmer hand in cricket advancement in the USA, the advent of minor league and major league cricket has created a pathway to becoming a professional cricket player that simply did not exist even as recently as two years ago. So it follows that youth around the country, as in the case of the boys in Palm Beach Titans, are now taking their cricket future seriously. This development will certainly bode well for the international prospects of Cricket USA in the coming years, which of course is surely by design.

Young Riyadh Mujeeb, born in West Palm Beach, turned 15 shortly after the U-15 trials. You would not think he is 15 from his stature, physique, and his athleticism. He had already played at his young age for several teams in the area until he found his current home at Palm Beach Titans. His father Asim tirelessly supports Riyadh’s love for cricket and he rewarded that support by performing very well with both the yo-yo fitness test and skills evaluation. Ultimately, the young right-arm pace bowler who is also quite solid with a bat in hand, was advised that his age proximity to being over 15 was an issue, but he was lauded by all the selectors as they now see him as an U-19 prospect and have him in their sights. When asked about this, Riyadh showcased his intelligence for a young man, no doubt a brain nurtured by being in the top high school academic program in the USA, International Baccalaureate, when he simply said, “I will continue to practice and get more features added to my game. I will continue my career with Titans and become even better than I am now and one day hopefully, I’ll play professionally.”

Just a year older than Riyadh, sixteen year old Adam Khan, who was also born and raised in South Florida and resides in Hollywood, FL also plied his skills at the trials for selection to the U-19 South Zone Team. He showcased his right arm leggies that earn him bundles of wickets in league competition as well as his proficiency with the bat. After all, he typically bats in Titans’ first team top order and has even scored heavily when he opened the batting on several occasions already in his young career. Already he has played for several championship teams in South Florida. He came to Palm Beach Titans through a strategic decision made by his father Irfan, who had maintained an excellent relationship with Titan’s leader Paul Ramkissoon from long-ago times when they played with and against each other. Irfan saw the emphasis on youth in Palm Beach Titans. He wanted Adam to be featured in a good team and he wanted to expose Adam to the structure of one of the best cricket organizations in the Southeast US. So far it’s working out splendidly, as Adam topped the yo-yo test chart and impressed with his skills at the Tampa trials, and went on to earn selection into the U-19 South Zone team. A monumental feat for a 16-year-old. When asked about it all, he confidently stated, “I am looking forward to playing in the national championship in Houston coming up on the 4th of April. With a good performance in this tournament, I’m looking forward to trying to make the USA U-19 team.”

Last but certainly not least is 20-year-old Atul Iyer, who is, in fact, the epitome of what is possible for youths with South Florida cricket roots. Atul was born in Pembroke Pines and has been aptly supported by his father Subbu and older brother Aditya over the years. That said, when he is not in Durham in the UK where he attends Durham University and plays for the college team, he comes home to play for Titans. He started very young in the ranks of a cricket academy in Broward and then played mostly for their representative league team for several years. He is an accomplished “proper technique” batsman that is unique in that he would be well suited to the longer formats of the game but can also adjust his game to the shorter versions. He is also a very adept RH off-spinner making him an excellent all round talent. He was the best in the trials for the senior men's team yo-yo test and followed up his previous selection as a reserve for the USA U-19 team with another great showing at the zonal level which can now hopefully lead to a USA Senior Team selection. When asked about his plans for the future, he stated, “I’m trying to be able to get a county cricket contract in the UK as well as make the USA national team.” No doubt achievable goals for this impressive yet very humble player.

All three players have the following in common:
They play for Palm Beach Titans, some driving upwards of an hour to be a part of the best cricket organization in South Florida.
They each have fathers that themselves played in South Florida and understood what it would take to support their sons in their quests for excellence in cricket.
All three Dads played cricket with Paul Ramkissoon, who himself started playing cricket in South Florida when he was 17 years old and understands the challenges of a youth player making it up the ranks.
All three will carry their talents to the zonal and hopefully national level, with the support and hopes of the entire Florida cricket fraternity behind them.
They also represent the best of the youth in the area and rest assured that the younger players view them as mentors and torchbearers.

Palm Beach Titans has been around since 1975 and has had some incredible players come through their roster and help them win championships over the decades. Titans offers cricketers of all ages and backgrounds the following:

As the above illustrates, Palm Beach Titans is all about having a winning tradition and playing good cricket, but the club also understands the need to invest in youth. After all, they are the future of cricket. Congrats to Riyadh, Adam, and Atul. May each of their cricket journeys mirror long well-constructed innings!

Adam receiving yet another trophy for his collection!

Riyadh bowling a short quick one