A. J. Johnson’s newly released “Shamelessly Yours: The Demon in You” is an encouraging discussion for spiritual healing and growth

“Shamelessly Yours: The Demon in You” from Christian Faith Publishing author A. J. Johnson is an impactful message of the modern challenges faced by many as spiritual warfare rages within and attempts to stop individuals from achieving God’s grace. 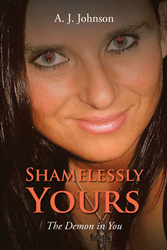 “Shamelessly Yours: The Demon in You”: a helpful resource for those seeking spiritual rejuvenation and healing. “Shamelessly Yours: The Demon in You” is the creation of published author A. J. Johnson, a dedicated mother of two who created a sports business for a community group for young people living with mental health and encompassing rescue animals/equine therapy.

Amanda shares, “As the author’s knowledge and dependency upon the one true God deepened through her own battles, AJ was led spectacularly deeper into the realms of spiritual warfare but always with a guiding hand. Then through prayerful revelation and much study, her eyes were opened to the spiritual battles around her and that of many others. She then found herself grappling desperately to pull them up from the murky waters in an attempt to shield them from what only she could see. But without God, they were in deep with the unseen enemy, but there was always an outstretched hand ready to reach down into the depths, and this is where she came in. As a tool of God or a seer, she was ready to grab anyone crying out into the night because someone heard them. But they did not fully believe, so it hurt the light. Held it back. So on she went, embracing ridicule and mocking because being called a religious nut was better than watching someone’s suicide. She wanted them free for active service and not living in defeat because their inner foe was deeply hidden and smirking. But she could see it. It could not hide its mirth from her, and this was war!

“A passion began to build for those who could not break free from tormenting or fearful thoughts, and she saw quite clearly what the world would call ‘mental health,’ thus turning and darkening into a spiritual battle so intense and frightening that it threatened to devour the victim whole. No medicine or therapy healed those she saw. Mainly because they considered themselves as mere onlookers or victims, plagued by medical issues. But sometimes this was easier than facing true godly sorrow and life-changing repentance—the only thing that can truly set us free. The master healer was at hand for those who would seek Him.

“Yet they were skeptical and unaware of the earth-shattering blow about to hit. She quickly learned that having no belief in spiritual matters does not protect you from them. In fact, it makes you more vulnerable to attack. ‘I do not exist’ is the biggest lie Satan ever told, and yes, he is real and so is his army, and you are on the menu. So are your family. Will you let him take everything from you or will you fight for your freedom? If so, then take my hand as we are going in—together.

“So here lies AJ’s ground-breaking and hard-hitting debut book, which will inspire you to search deeper into your very soul and uproot and expose what does not belong there. In Him alone. There is freedom at the cross.”

Published by Christian Faith Publishing, A. J. Johnson’s new book will challenge and encourage readers on their spiritual path.

Amanda shares in raising awareness of the challenges many perceive as worldly problems that are in truth a result of something more powerful.

Consumers can purchase “Shamelessly Yours: The Demon in You” at traditional brick & mortar bookstores, or online at Amazon.com, Apple iTunes store, or Barnes and Noble.

For additional information or inquiries about “Shamelessly Yours: The Demon in You,” contact the Christian Faith Publishing media department at 866-554-0919.