A New Robert A. Heinlein Book to be Published Based on Newly Recovered Manuscript

The complete text of a new book by Robert A. Heinlein has been recovered and restored and will be published by Phoenix Pick in November 2019. 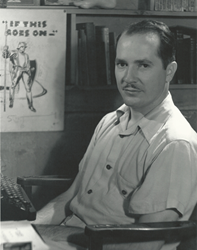 Given his sense of humor, it would not be surprising for Heinlein to have written two parallel texts for a book about parallel universes.

For more information and updates go to ArcManorBooks.com/heinlein

Phoenix Pick recently announced that, working with the Heinlein Prize Trust, they have been able to reconstruct the complete text of an unpublished novel written by Robert A. Heinlein.

Heinlein wrote this as an alternate text for "The Number of the Beast". This text of approximately 185,000 words largely mirrors the first third of the published text, but then deviates completely with an entirely different story-line and ending.

The alternate text, especially the ending, is much more in line with traditional Heinlein books, and moves away from many of the controversial aspects of "The Number of the Beast".

There has been speculation over the years about a possible alternate text, and the reason it was written, particularly since one book is not just a redo of the other ─ these are two completely different books.

It is possible that Heinlein was having fun with the text because "The Number of the Beast" and the new book both deal with parallel universes. Given his sense of humor, it would not be surprising for Heinlein to have written two parallel texts for a book about parallel universes.

The new book was pieced together from notes and typed manuscript pages left behind by the author. It is currently under editorial review by award-winning editor, Patrick LoBrutto.

Phoenix Pick expects to publish both "The Number of the Beast" and the new book, tentatively titled "SIX-SIX-SIX", just ahead of this year’s holiday season.

A limited number of digital advance copies will be made available for purchase by fans prior to actual publication. Fans may sign up for more information about this and other news and offers related to the new book at ArcManorBooks.com/heinlein

The Heinlein Prize Trust manages most of Robert A. Heinlein’s literary assets and is purposed to encourage and reward progress in commercial space activities. It also publishes the deluxe forty-six volume collectors set of the complete works of Robert A. Heinlein known as the Virginia Edition.