For the first time in its 13 year history, the Young Inventor Challenge (YIC), held annually during Chicago Toy and Game Week (ChiTAG), crowned three grand prize winners for Most Marketable Concept, a category sponsored by Target and Pressman Toy. 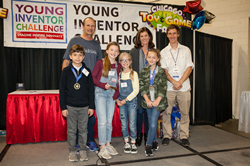 “We are so impressed and excited for each of these young people,” said David Norman, President of Pressman Toy. “We can’t promise anything yet, but we are seriously looking at each of the winning games to possibly manufacture and sell under the Pressman Toy name.”

For the first time in its 13 year history, the Young Inventor Challenge (YIC), held annually during Chicago Toy and Game Week (ChiTAG), crowned three grand prize winners for Most Marketable Concept, a category sponsored by Target and Pressman Toy. Cain Guerra, a 4th grader from Palos Park, IL won for "Soup It." Lyra Acosta, a 5th grader from Palos Hills, IL won for "Hypnodizzy." The team of Lily Brown of Alpine, UT and Tait Hansen of Evanston, IL, both 6th graders, won for "Bet You Can’t." Each of the winning young inventors along with three members of their family will take a trip to Target Headquarters in Minneapolis for a behind-the-scenes tour of how products move through the processes from selection all the way to store shelves.

Over 250 kids competed in the YIC spanning 5 countries and 15 states. Each one received feedback from 100 mentors from Target, Goliath, PlayMonster, LEGO, Spin Master, Razor, Disney, Hasbro, Mattel, IDEO, KID Group, 7Towns and many more worldwide. A complete list of 2018 YIC winners can be found here: https://www.chitag.com/yic

“The competition gets better and better every year. We are so impressed and excited for each of these young people,” said David Norman, President of Pressman Toy. “We can’t promise anything yet, but we are seriously looking at each of the winning games to possibly manufacture and sell under the Pressman Toy name.”

Pressman Toy partnered with 2017’s Young Inventor Challenge winner Ellie Skalla of Oak Park, IL and manufactured her game "Galactiquest." It will be released in January 2019 exclusively at Target. PlayMonster also has two games coming out in Fall 2019 from Young Inventor Challenge winners including "Draw-n To Crime" by Tiggy Silwinski of Palos Hills, IL and "There’s a Poo on My Shoe!" by Edie Piacenza of Elmhurst, IL.

The Young Inventor Challenge was just one of many highlights at the 16th annual Chicago Toy and Game Week (Nov. 15-18) which garnered more than 1.5 billion media impressions in 2018. Over the course of four days, more than 30,000 toy and game fans from around the world came together at Navy Pier to celebrate play and meet the inventors behind the world’s most popular toys and games.

Many of those inventors were honored at the Toy and Game Innovator Awards gala (TAGIEs) Friday evening. Spin Master CMO Nancy Zwiers gave the keynote. As a former inventor herself, she shared some of the challenges she faced in her career. “It’s a rollercoaster ride. I didn’t do it because it was easy. Being an inventor is damn hard. We do this because the world needs our creativity, our ability to think outside the box, to see opportunities that no one else can see and our playfulness.” Later, awards were given in categories such as:

Dynamic duo David Small and Paul Rago shared their 27 year history in the industry with the crowd through photos and memorable stories starting with their first toy, Teddy Ruxpin, all the way to present day. “It’s nice to still have a lifetime after all of these inventions, aside from the achievement, it’s just nice to be kicking and still doing toys,” Paul said.

A complete list of TAGIE nominees, winners and honorees can be found here: http://www.chitag.com/2018-tagies

On Saturday morning, doors opened on the 16th annual Chicago Toy and Game Fair, an experiential and immersive playground where families got the chance to play with the latest toys and games, and interact with the inventors who created them. More than 135 companies exhibited. Fair attendees voted the Best Game in Show Winner, "Greedy Granny" by Goliath Games. Kids and adults got the chance to try and steal cookies from a real-life Greedy Granny. For the second year in a row, the ever-popular Playfoam was voted Best Toy in Show. This exhibit was a favorite with tables piled high of the squishy, squashy modeling compound, surrounding a gigantic balloon igloo where kids could receive a free Playfoam Pals Series 3 snow globe.

Other attendee favorites included PlayMonster, which allowed kids and adults to try their luck at "Don’t Rock the Boat." Razor hosted an open floor for test driving their latest offering, the Drift Rider. Ravensburger showed off its new GraviTrax and many brands such as MindWare’s babu blocks, Baby Paper and startups like YoeeBaby participated in ChiTAG’s inaugural Baby and Toddler PlaySpace. Another inaugural feature, the Adult Games Beer Garden featured brands like Educational Insights which gave game lovers the chance to play a round of Sculptapalooza against a professional comedian from Upright Citizen’s Brigade. University Games showed off its one-of-a-kind Tabletop Shuffleboard. Other games for grown ups included Game of Nasty Things, Brain Fart, Utter Nonsense Naughty Edition, Shit Happens, Jenga Giant, Schmovie, Spank the Yeti, Diced!, Judge Your Friends, Ridiculous Expositions, DUH, Blank It, Fake News, Game of Phones, Injury or Illness, Debockle, What Do You Meme?

First time exhibitors Thomas Kies and Andreas Hoenigschmid of Geobender made quite a splash when hundreds of hotel guests woke up to #chitag carved in the sand on the closest beach to Navy Pier. Turns out, sand carving is how Geobender got its start. “They were brilliant and have a free ChiTAG booth for life,” said Mary Couzin, CEO and founder of the Chicago Toy and Game Group.

The annual consumer event was immediately preceded on Thursday and Friday November 15 and 16 by the ChiTAG Inventor and Innovation Conferences, where new and professional inventors and design students interacted with over 95 top toy and game acquisition executives from 65 companies, including Spin Master, LEGO, Hasbro, Mattel, Goliath, PlayMonster, Playmobil, Bandai and The Michael Kohner Corporation coming from over 25 countries. This year’s conferences featured keynotes from Adi Golad, Founder and Chairman of Goliath, Gray Bright, CEO and Founder at Cloud, Karri Bean, Senior Manager of LEGO at Disney Consumer Products, Tanya Thompson, Hasbro’s Director of Global Product Acquisition and Inventor Relations for Gaming, Dr. Kelly Page, Chief Innovation Officer of IL Mathematics and Science Academy and Tim Walsh, Fearless Leader at The Playmakers plus more than two dozen other speakers across five conference tracks.

The 2018 ChiTAG Week and the 17th annual Chicago Toy & Game Fair will take place next year, the weekend before Thanksgiving on November 21-24. All details will be released as they become available at http://www.ChiTAG.com.

The Great Mystery of ChiTAG 2018First time exhibitors Thomas Kies and Andreas Hoenigschmid of Geobender were awarded a free ChiTAG booth for life after this surprise carving of #chitag was found in the sand by Navy Pier.