A World Class Refinery of Strategic Metals in The United States

U.S. Rare Earth Elements and Magnesium Refinery: Additional surveys and drilling at the REE Magnesium Inc mine site have confirmed the existence of rare earth elements (REE) in conjunction with the already proven reserves of 22 million tons of magnesium oxide. REE Magnesium Inc will be the refiner of REE and magnesium from that mine. 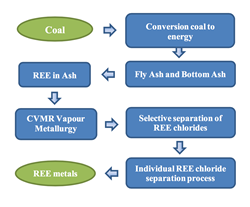 Rare Earth Elements are vital to the development and manufacturing of high-tech devices such as computers, cell phones, and our national defense systems,” said U.S. Secretary of Energy Rick Perry.

Additional surveys and drilling at the REE Magnesium Inc mine site have confirmed the existence of rare earth elements (REE) in conjunction with the already proven reserves of 22 million tons of magnesium oxide. REE Magnesium Inc will be the refiner of REE and magnesium from that mine.

In addition to the confirmation of commercially viable rare earth elements, REE Magnesium Inc has entered into a partnership with CVMR® (USA) Inc. (CVMR®) to design, build and operate the refinery. CVMR® will assist REE Magnesium Inc in importing heavy REE to the United States from three African countries to refine. This will create one of the largest “World Class” metal refining establishments in the United States that can refine heavy rare earth elements, magnesium, vanadium, nickel, and cobalt using CVMR®’s proprietary processes and technologies without any impact on the environment.

CVMR®’s technologies also allow extraction of REE from coal ash. REE Magnesium Inc has been licensed by CVMR® to use these technologies in its refining operations in the United States. The refinery will be refining magnesium, energy-related metals, and rare earth elements.

“Rare Earth Elements are vital to the development and manufacturing of high-tech devices such as computers, cell phones, and our national defense systems,” said U.S. Secretary of Energy Rick Perry. “The current difficulties and high expenses associated with REE extraction have left the U.S. dependent on foreign REE imports. Supporting innovative research and development to establish efficient, cost-effective REE extraction methods is critical to our country’s energy and national security.”

Developments within the U.S. government will directly influence metal markets and the application of advanced technologies for production and use of various metals. U.S. government developments are focused on metals and metal products that are used in batteries, electronic devices, aerospace, the automotive industry, and defense-related systems. The U.S. government’s overall strategy is to:

2. Support production capacity in the form of sustained resources and needed investments for an integrated US capability

3. Encourage new technology development and improvements in the production processes

4. Drive the recovery, reuse, and recycling of strategic materials by U.S. government agencies through life cycle planning and the design of recovered constituents as an end-use disposition

The technologies of CVMR® are well-positioned to support the United States strategy, and in partnership with REE Magnesium Inc's resources and strategic capabilities, together they can provide advanced metal refining and the production of progressive metal forms that make product innovation in this field a reality.

Section 14 of the Strategic and Critical Materials Stock Piling Act, the U.S. Department of Defense (DOD) assessment of potential U.S. problems regarding strategic and critical non-fuel materials in the context of a congressionally-mandated Base Case planning scenario, identifies 23 materials that are considered by the intelligence community, along with input from the DOD and the Department of the Interior to have a shortfall—insufficient supply to meet demand.

In the past year, the prices of many of the strategic metal elements, assessed by the DOE to be of strategic importance, have been highly volatile; in some cases, they have increased tenfold.

In recent years, demand for almost all of the 23 materials examined has grown more rapidly than demand for commodity metals such as steel. The growing demand for the materials studied by the DOE is derived, in part, from clean energy technologies as well as consumer products such as cell phones, computers, and flat panel televisions.

In general, global materials supply has been slow to respond to the rise in demand over the past decade due to a lack of available capital, required long lead time, trade policies, and other factors. For many key materials, market response is further complicated by the complexities of production. In addition, for some key materials, the market’s lack of transparency can affect its ability to function efficiently.

Many governments recognize the growing importance of raw materials to economic competitiveness and are taking an active role in mitigating supply risks. REE Magnesium Inc is responding to these market opportunities by offering additional sources of supply and a World Class refining complex in the heart of the United States, using CVMR®’s proprietary technologies and know how. The capital requirement for this project exceeds $500 million. The first phase is estimated to cost approximately $60 million and is well underway.