Many people may not know that turtles are the most endangered groups of vertebrates in the world. A new scientific study by the Tennessee Aquarium and others examines the global impacts of a world without turtles. 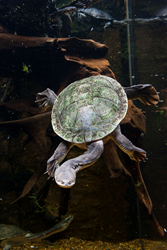 “The alarming rate of turtle disappearance could profoundly affect how ecosystems function as well as the structure of biological communities around the globe.” - Dr. Josh Ennen, research scientist at the Tennessee Aquarium Conservation Institute

With their sturdy shells, long lifespans and wrinkled skin, people around the world have long revered turtles as symbols of wisdom, endurance and perseverance. For millennia, some cultures have even conceptualized the world as being carried on the back of a giant turtle or tortoise.

In terms of their ecologically significance, scientists say, that’s not too far from the truth thanks to the vital roles turtles play in maintaining healthy food webs, dispersing seeds and creating habitats for other species.

But despite their association with stability and longevity, turtles around the world are on decidedly shaky ground and are among the most threatened groups of vertebrate animals on earth — more than birds, mammals, fish or amphibians. About 61 percent of the world’s 356 turtle species are threatened or already extinct.

These long-lived, slow-reproducing animals outlasted the dinosaurs and have roamed the earth for more than 200 million years, but research shows their numbers are dwindling due to habitat destruction, disease, climate change and over-exploitation as pets and food.

Should turtles’ decline continue, the ecological consequences could be disastrous, according to a new paper by scientists from the U.S. Geological Survey, Tennessee Aquarium Conservation Institute, University of California, Davis, and the University of Georgia.

The paper — “Where Have All the Turtles Gone, and Why Does It Matter?” — is the cover story of the upcoming issue of the monthly scientific journal Bioscience. The authors synthesize more than 90 other studies about turtles to paint a picture of their global status and ecological roles while predicting the ramifications of their eventual disappearance.

“Our goal is to provide resource managers with a full picture of the state of these iconic animals worldwide, and what long-term impacts our environment might experience if populations continue to decrease and species loss continues,” says USGS Scientist Jeffrey Lovich, the study’s lead author. “Turtles contribute to the health of many environments, including desert, wetland, freshwater and marine ecosystems, and their decline may lead to negative effects on other species, including humans, that may not be immediately apparent.”

This paper provides the first major review of the various roles that large populations and diverse communities of turtles provide from an ecological perspective. Work on the project began in the fall of 2017, acting on a line of research Lovich has wanted to pursue for years.

The study considers the many ways turtles impact their ecosystem, from their role in food webs and ecosystem restoration to landscape alteration.

As herbivores, carnivores and omnivores, turtles feed on a wide range of items, allowing them to influence the structure of many other plant and animal communities. Within some environments, the sheer mass of some turtle species gives ecological significance. At more than 855 kilograms per hectare, the Pond Slider and its eggs represent an important food source for other animals in lakes and slow-moving waterways throughout the Southeastern U.S.

Turtles can also shape their environment. Some species, like Agassiz’s Desert Tortoise in the American Southwest and the Gopher Tortoise in the American Southeast, dig deep burrows creating habitat for other species. The mounds of soil near the entrance of Gopher Tortoise burrows can create new habitat for some plant species, increasing overall plant diversity nearby. The burrows are used at various points in their life cycle by hundreds of other species, including spiders, insects, snakes, amphibians, other reptiles, rabbits, foxes and even bobcats.

“The ecological importance of turtles, especially freshwater turtles, is underappreciated, and they are generally understudied by ecologists,” says Dr. Josh Ennen, research scientist at the Tennessee Aquarium Conservation Institute. “The alarming rate of turtle disappearance could profoundly affect how ecosystems function as well as the structure of biological communities around the globe.”

The study’s authors say they hope the paper not only opens the public’s eyes to the many roles turtles play but also how the dwindling of turtles reflects the negative impact human activity can have on the environment.

“As modern descendants of an ancient lineage, turtles are touchstones for how human influences are causing the decline of so much of the world’s wildlife,” says Whit Gibbons, professor emeritus and senior ecologist at the University of Georgia’s Savannah River Ecology Laboratory and Odum School of Ecology. “Our hope is that everyone will be encouraged to engage in concerted efforts to conserve their well-earned legacy as part of our natural habitats.”

To lose animals that fill so many roles and that have survived as long as turtles would be devastating, and not just due to the ecological ramifications. As time goes on, smaller populations could come to be perceived as normal to those who have no personal experience with more robust turtle communities, says UC Davis Scientist Mickey Agha.

“We must take the time to understand turtles, their natural history, and their importance to the environment, or risk losing them to a new reality where they don’t exist,” Agha says. “People born into a world without large numbers of long-lived reptiles, such as turtles, may come to accept that as the new norm.”