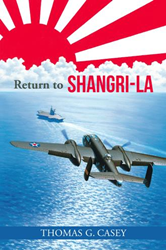 Chip lost his uncle during the bombing of the Pearl Harbor when he was a young boy. Thirty-six years later, he lost his wife and son in a head-on crash in her Japanese sports car hit by a Japanese pickup truck. A year later he buys a B-25, has it restored and named “Ruptured Duck.” After the show, he is in a real dogfight with a Japanese pilot flying a zero fighter from the show which blows up in his flight path causing severe damage to his plane and forced to crash land killing his best friend.

He makes plans to seek revenge onto the Japanese automaker for killing his uncle, his wife, son and his best friend. With his plane completely restored, he told the Chinese government to take his plane of tour of China visiting the towns and cities the Doolittle Raiders escaped through. His plan was approved. He ships his plane to China to begin his mission to end his life flying into the auto maker in Tokyo who killed his family and best friend. How will his mission turn out when the Japanese dense system may hinder his plan? Visit https://www.amazon.com/Return-Shangri-Thomas-G-Casey-ebook/dp/B081ZTKM6J/ref=sr_1_1?keywords=9781728336909&qid=1577935913&sr=8-1 to know more about the book.

Here is an excerpt taken from the book:
Chip walked over and sat down in a wicker chair next to his friend. It was difficult to see Bob’s face in the darkness as the only light that reflected on the porch was from a streetlight a half block away. He knew his friend was feeling his booze. He drank beer all afternoon and then switched to gin and tonic.

About the Author
Thomas G. Casey was born in Brooklyn, New York and raised in Westfield, New Jersey. After serving in the Air Force as a flight engineer for the Military Air Command during the Korean War. He moved to Florida and currently lives in Sarasota with his best friend and wife Catherine and two shih-tzu pups, Lady and Missy. A private pilot and experienced sailor, he worked for SAIL Magazine for 30 years. His work took him to almost every island in the Caribbean calling on governments and international chartering companies, which led him to write an adventure novel called “Island Drummer.” He also wrote a personal story about his job working at a New Jersey beach hotel, “Beaches Blondes and Bellhops.” Most recently, he wrote an illustrated children’s educational book called “Angus, A Boy & His Sailboat” with his own artwork.

AuthorHouse, an Author Solutions, Inc. self-publishing imprint, is a leading provider of book publishing, marketing, and bookselling services for authors around the globe and offers the industry’s only suite of Hollywood book-to-film services. Committed to providing the highest level of customer service, AuthorHouse assigns each author personal publishing and marketing consultants who provide guidance throughout the process. Headquartered in Bloomington, Indiana, AuthorHouse celebrates over 23 years of service to authors. For more information or to publish a book visit authorhouse.com or call 1-888-519-5121.