Boyhood Adventures – Second Edition, written by Aaron L. Carter and published by Page Publishing, tells the story of three eight-year-old boys living in Texarkana, Arkansas, in 1953. The boys escape from boredom by engaging in spooky, nocturnal activities at the local cemetery, an abandoned asylum, and a haunted mansion. 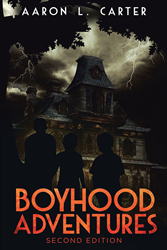 Aaron L. Carter has completed his book, “Boyhood Adventures - 2nd. Edition.” It is a work of historical fiction, following the exploits of three young boys living in Texarkana, Arkansas in 1953. Dennis Williams, Frank Cherry, and Lee Farmer engage in wild and crazy activities in a local cemetery, an abandoned asylum, and a haunted house.

The author skillfully uses historical events to season the reader’s mood by using tales such as the Texarkana Moonlight Murders as follows:

“The fact that the three boys stood amid the most morbid and notorious death scene since the Moonlight Murders of 1946 seemed to have eluded their attention. The murders had been reported in newspapers all over the four-state area. The murder spree spawned uneasiness throughout the area. The Texarkana Gazette detailed the investigation of eight unsolved killings in and around Texarkana. The killings were attributed to a person known only as the Phantom Killer. Eight people had been attacked, five of whom died due to the severity of their injuries. The attacks occurred between February and May of 1946. Each attack was said to have been committed at night. It remained a matter of debate as to whether or not the attacks occurred under the watchful eye of a full moon.”

Published by Page Publishing, Aaron L. Carter’s story depicts the boys’ varying reactions to their activities. Dennis, the adventure seeker, is relentless in his pursuit of adrenaline. Lee has become addicted to excitement and will follow Dennis almost anywhere if it means he doesn’t have to listen to another episode of The Bickersons. Frank is the antithesis of Dennis. While he is reticent to join his friends on a visit to the local cemetery, he thrives on his relationship with his two friends.

Readers who wish to experience this original work can purchase “Boyhood Adventures” at bookstores everywhere, or online at the Apple iTunes Store, Amazon, Google Play, or Barnes and Noble.