In new book, John Saintignon reflects on his illustrious sports career, beginning from his humble Arizona roots to becoming a top NCAA scorer for University of California 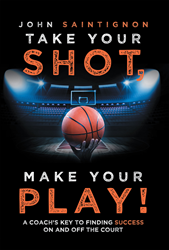 Being a head coach has opened my eyes to a lot of things – in life, in business and on the court – and my hope is that readers can take some of that wisdom for themselves to create a life they love.

A world-renowned basketball coach, athlete and motivator has released his inspirational roadmap to prosperity that encourages readers to identify and pursue their purpose and, ultimately, cultivate their ideal life by taking chances, learning from failure and chasing their dreams.

In “Take Your Shot, Make Your Play! A Coach’s Key to Finding Success on and off the Court,” author John Saintignon reflects on his early roots growing up on the south side of Tucson, Ariz., and his subsequent rise to becoming one of the NCAA’s top players. Through his own highs and lows, Coach Saintignon delves into the importance of setting high standards, paying attention to detail and embracing challenges – a message that is just as relatable on the court as it is in day-to-day life.

“I wrote this book to help people pursue their passions,” Coach Saintignon said. “Many of us along our journey are encouraged to follow our dreams, and then once we hit 18 or go to college, we’re faced with big, nebulous decisions about our careers, academics and personal goals. Being a head coach has opened my eyes to a lot of things – in life, in business and on the court – and my hope is that readers can take some of that wisdom for themselves to create a life they love.”

“Great book for anyone looking for motivation,” a reader wrote in a five-star Amazon review of the book. “It is a short book and I was able to read it in one night. After I finished, I wanted to know more about John’s life and coaching style. Inspiring!”

Brimming with sage wisdom that is just as applicable to athletes as it is to entrepreneurs and others who are looking for direction, “Take Your Shot, Make Your Play!” presents an empowering guide to success using relatable sports metaphors and provides practical personal and professional guidance to achieving prosperity in any pursuit.

About the author
John Saintignon grew up on the south side of Tucson, Ariz., and has long been a leading figure in the basketball world. Coach Saintignon notably found success in college as a player for University of California, Santa Cruz, where he remains the all-time leading scorer, and led NCAA basketball scoring in 1985 and 1986, averaging 31.2 points per game. He has since gone on to coach international basketball clubs as well as high school- and college-level programs, and he currently serves as the president and owner of Orange County Magic Basketball, Inc., an Amateur Athletic Union basketball academy based in Southern California. Coach Saintignon holds a bachelor’s degree in economics from University of California, San Diego, and a master’s degree in sports administration from Liberty University. He currently resides in Villa Park, Calif. To learn more, please visit http://www.johnsaintignon.com or follow Coach Saintignon on Facebook, Twitter, LinkedIn, Instagram and YouTube.