ActivePDF Announced as Supporting Sponsor of the Los Angeles Chargers 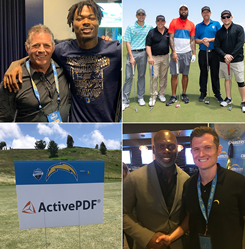 "We look forward to developing our professional relationship with the Chargers and their loyal fan base, in addition to expanding our influence into the surrounding Los Angeles communities.” ~ Tim Sullivan, ActivePDF CEO and Chief Architect

ActivePDF, the leading provider of PDF automation tools and digital transformation solutions, is pleased to announce a partnership with the Los Angeles Chargers for the 2019 season.

Along with leading businesses into digital transformation with award-winning PDF solutions, ActivePDF has established itself as a valued partner of respected athletes, teams, charitable foundations, and philanthropic events.

ActivePDF’s partnership with the LA Chargers for the 2019 season includes:

“We are thrilled to partner with the LA Chargers for the 2019 season,” says Tim Sullivan, ActivePDF CEO and Chief Architect. “The Chargers organization sets an elite standard for sports franchises, when it comes to forming powerful business alliances and inspiring philanthropic events. The organization matches ActivePDF’s dedication to community involvement, which is of the utmost importance to us. As we build upon our successes in Orange County, we look forward to developing our professional relationship with the Chargers and their loyal fan base, in addition to expanding our influence into the surrounding Los Angeles communities.”

ActivePDF’s continued support and sponsorships have collectively raised over $1.5M over a 12-month period across different organizations and events, which include the Hoag Classic, Getzlaf Golf Shootout Benefiting CureDuchenne, Warriors With Hope, and Charley Hoffman Foundation.

About Los Angeles Chargers
For 59 seasons, the Chargers have led the fight to stretch the imagination and give fans the most exciting show in football. Behind the dramatic games, unforgettable highlights, beloved players, groundbreaking performances and one of the best uniforms in the NFL lies an uncompromising drive for success – one rooted in toughness, resilience and old-fashioned hard work. A charter member of the American Football League, the franchise was established in Los Angeles in 1960 and called the Los Angeles Memorial Coliseum home during its first year of existence. From 1961 to 2016, the team played in San Diego. Advancing to five of the first six AFL Championship games ever played, the Chargers claimed the 1963 title and later joined the National Football League when the two leagues merged in 1970. Since the merger, the Chargers have gone on to appear in Super Bowl XXIX and have captured an additional 10 division titles. The Chargers were purchased by construction leader and real estate developer Alex G. Spanos in 1984 and have been under the guidance of Spanos’ eldest son Dean, the team’s current Chairman of the Board, since 1994. Dean Spanos’ sons – A.G. Spanos, President of Business Operations, and John Spanos, President of Football Operations – oversee the day-to-day operations of the franchise. The Chargers returned to Los Angeles in 2017 and play all home games at Dignity Health Sports Park while the team’s new L.A. Stadium at Hollywood Park is constructed. For more information, call 1-877-CHARGERS or visit http://www.chargers.com.

ACTIVEPDF and the ActivePDF Logo are registered trademarks of ActivePDF, Inc. All other trademarks are property of their respective owners.