Acclaimed actor Haaz Sleiman will be honored by the OUTshine LGBTQ+ Film Festival with a Vanguard Award for his contributions in helping to tell LGBTQ+ stories, as well as exemplifying outstanding leadership and support of community equality, representation and education. 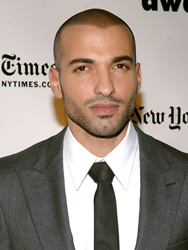 As a recently ‘out,’ gay, Muslim actor in Hollywood, Haaz Sleiman has overcome tremendous obstacles to share his story of strength, truth and acceptance.

Acclaimed actor Haaz Sleiman will be honored with a Vanguard Award at the 11th Annual Fort Lauderdale Edition of the OUTshine LGBTQ+ Film Festival. This award, presented by the Festival to a member of the LGBTQ+ community, recognizes notable individuals in entertainment for their contributions in helping to tell LGBTQ+ stories, as well as exemplifying outstanding leadership and support of community equality, representation and education. Previous Vanguard winners include Gloria and Emilio Estefan and Fred Rosser (aka WWE Superstar Darren Young). Sleiman will receive the award on Sunday, October 20, at 8 p.m. during the Closing Night Awards Party at Nu River Landing (511 SE 5th Avenue in Fort Lauderdale).

"As a recently ‘out,’ gay, Muslim actor in Hollywood, Haaz Sleiman has overcome tremendous obstacles to share his story of strength, truth and acceptance,” said Victor Gimenez, executive director of OUTshine LGBTQ+ Film Festival. “We’re thrilled to honor and embrace his talent and support for the LGBTQ community with this Vanguard Award which we hope will inspire others to excel and achieve their dreams.”

Haaz Sleiman was born and raised in Lebanon. He moved to the United States when he was 21 and developed a love for acting in film, television and theater. His breakout role was Tarek in the award-winning film “The Visitor,” for which he was nominated for an Independent Spirit Award (Best Supporting Actor) and an IFP Gotham Award (Best Feature, Best Ensemble). As Mohammed De La Cruz in Showtime’s “Nurse Jackie,” Sleiman broke barriers as the first gay Muslim character on American television. He also appeared in the ABC series “Of Kings and Prophets,” National Geographic's “Killing Jesus” in the title role, “The Good Wife,” “Those People,” “24,” and “Covert Affairs,” in addition to the BAFTA-nominated British miniseries, “The Promise.” He was well-received on the New York stage in the critically acclaimed play, “Food and Fadwa.” Most recently, Haaz completed the Amazon/Paramount series “Jack Ryan,” opposite John Krasinski.

“I am honored to have been selected as this year’s OUTshine Vanguard Award recipient,” said Sleiman. “Growing-up in the Middle East as a gay man was extremely isolating, but they couldn’t take away my empathy and compassion. I have an immense love for the unconditional acceptance of the LGBTQ community. Everything I do now, publicly, is to ensure that no one ever has to feel alone and that everyone has a sense of belonging.”

The 11th annual Fort Lauderdale Edition of the OUTshine LGBTQ+ Film Festival, a bi-annual film festival whose mission is to unite the community through social events and LGBTQ+ media that inspire, entertain, and educate, takes place October 10 – 20, 2019. This year’s hotly anticipated film festival will spotlight over 50 contemplative, comedic and creative films from 13 countries, panel discussions with filmmakers and talent, and various parties and special events. Films will be screened at the Classic Gateway Theatre (1820 East Sunrise Boulevard, Fort Lauderdale) and Savor Cinema (503 Southeast 6th Street).