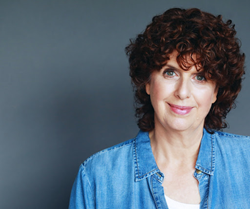 Character actress, Deb Snyder, will guest star on ABC’s popular TV show, “Mixed-ish.” Snyder will play ‘Dolores,’ a sad sack, needy junior attorney at Alicia’s law firm. She’s the type of person who overshares way too much. Her episode will premiere Tuesday, March 2nd at 9:30 P.M. on ABC and streaming on Hulu.

Snyder’s additional television work includes a role as ‘Marsha’ on HBO’s “Big Little Lies,” and guest appearances on “Life in Pieces,” “Boston Legal,” “Unscripted,” “Sins of the City,” and “General Hospital.” Snyder has appeared in numerous national television commercials, playing a wide range of characters including a tuba-loving Mom and a hungry truck driver. Her 2019 Bombas Sock commercial, where she plays perfectly opposite a Yorkie Terrier mix, was ‘One of the Holiday’s Most Talked about Commercials,’ per Ad Week Magazine.

Snyder’s film credits include Random Hearts (directed by Sydney Pollack) where she played a clueless art gallery assistant opposite Harrison Ford and a starring feature role in Ang Lee’s Pushing Hands. Other film credits include Landfall, Sins of the City, and Detour. Currently, she can be seen in the web series “Meet Me at the Barre” and “Eve & Edna.” On stage, she made her Off-Broadway debut creating several characters for Nicky Silver in New York City, including originating the role of the uptight repressed ‘Vivian’ in Freewill and Wanton Lust (her name is listed in the Samuel French edition as the originator). Snyder has performed in countless plays and musicals in the Los Angeles area including Six Degrees of Separation, Atalanta, Clean House, and two Ovation-nominated musicals; Divorce the Musical and The Breakup Notebook: The Lesbian Musical, and The Man of La Mancha, captivating an entire audience in one singing scene. Snyder received her MFA from Brandeis University in Boston. She studied overseas at British European Theatre Studies Group in London with teachers from the Royal Academy of Dramatic Arts (RADA) and the London Academy of Music and Dramatic Art (LAMDA). She received her BA from Kalamazoo College.

Whether it’s comedy or drama, Snyder looks for the physical aspects of her characters, rounding out her roles with body language and vocal tones that give a more in-depth, realistic feel to the part. Snyder’s technique gives the audience a complete sense of the character, that you can both see and hear. Deb Snyder also uses her strong vocals to write and sing original songs dealing with everyday issues and the joys of childhood. With her music writing partner Philip, PBnDeb use personal childhood experiences, vivid imagination and musical creativity to write. Currently, they are working on a song dedicated to the First Dogs of the White House, Major and Champ. When it was announced that dogs would be returning to the White House, a song was born! The family-friendly, bluesy tune called “White House Puppy News” will be released this Spring. Philip and Deb have rescued dogs and have written an entire album about their dogs, entitled, A Dog's Heart which can be purchase or listened to on Bandcamp by clicking here: https://pbndeb.bandcamp.com/album/a-dogs-heart. Snyder also finds inspiration for her music and acting from her younger days growing up in Yonkers with Arabic grandparents (on her father’s side) and then moving to a small town at the age of 10 to be near her mother’s parents who had a farm in Pekin, Illinois just outside of Peoria. Even after all these years, she still uses the ear-splitting whistle her Grandma taught her on the farm (using no fingers) to call her dogs in.

A resident of El Sereno (a neighborhood near Pasadena, CA) Snyder always makes time to unwind and clear her mind by taking a ride on the Angeles Crest Highway on her black Honda Shadow VLX, that she named Raven. When she rides her motorcycle, Snyder’s entire body and mind are focused on the art of riding, the scenery, and the feeling of being free. It empowers her and she feels most present when she’s riding. She also loves hearing “hey, it’s a girl” from onlookers as she drives by.

For more information or to schedule an interview with Deb Snyder, please contact Deborah Mellman / deb@dmpublicrelations.com / 310-467-5226