Adam Noor’s new book “The True Story of a Muslim Middle Eastern Family in the United States: Part 1” is a deeply personal memoir of a dream shattered by brutal violence

Recent release “The True Story of a Muslim Middle Eastern Family in the United States: Part 1” from Page Publishing author Adam Noor is a poignant reflection on his painful journey from Jordan to America to become a famous Arabic singer, recounted in excruciating but honest detail. 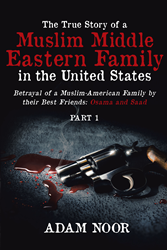 Adam Noor, a Jordanian-born Muslim who moved to America to pursue the American Dream, has published his latest book “The True Story of a Muslim Middle Eastern Family in the United States: Part 1”: a true story revealing the strength of character that enables him to persevere through vulnerability to transform his initial passion and exuberance for life into a determination to find personal meaning that can transcend suffering.

Working at a local gas station, he was robbed and brutally beaten almost to death. The attack resulted in severe health problems that not only ended his dream but had a profound impact on the rest of his life.

In this book, Mr. Noor describes, in excruciating detail, his struggles to cope with severe health symptoms, battle a heartless insurance company, grapple with the aftermath of 9/11’s eﬀect on the U.S. public’s attitudes toward Muslims, grieve over the senseless murder of his father and help Representatives Chris Smith and Nick Allen to ﬁght against The Early Release Program.

It is Mr. Noor’s hope that this book will ensure that his father’s story is never forgotten. It is also his hope that people who are experiencing seemingly insurmountable obstacles will be inspired to conclude that survival is possible. Even for a Muslim individual, living in the United States in 2020.

Published by Page Publishing, Adam Noor’s riveting book is a heartbreaking tale of perseverance, justice, and survival for a Muslim-American.

Readers who wish to experience this engrossing work can purchase “The True Story of a Muslim Middle Eastern Family in the United States: Part 1” at bookstores everywhere, or online at the Apple iTunes store, Amazon, Google Play, or Barnes and Noble.