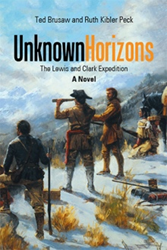 Does “The Corps of Discovery” ring a bell? According to Study.com, it was the first American mission to explore new lands purchased for the United States and its people. Authors Ted Brusaw and Ruth Kibler Peck tell their story in the book titled “Unknown Horizons: The Lewis and Clark Expedition” (published by Xlibris). Readers may visit https://www.xlibris.com/Bookstore/BookDetail.aspx?BookId=SKU-001160095 to purchase and to know more about the book.

When President Thomas Jefferson completed the deal with Napoleon Bonaparte to purchase the Louisiana Territory for the United States, he immediately sought the services of courageous men to explore and chart the new land. In 1803, Meriwether Lewis and William Clark gathered a crew of adventurous men of strength and ability to form the Corps of Discovery. Readers are invited to witness the expedition of the group as it traveled by boat, by foot, and by horseback through the uncharted land beginning at St. Louis and ending at the Pacific Ocean near present-day Seattle, and back again.

“All members of the Corps of Discovery were real people with goals, joys, and fears,” Peck shares. “’Unknown Horizons’ is more than a dry documentary because the authors give the men personality to enrich the story.”

Adventure and history enthusiasts will be drawn to this story of uncommon courage, perseverance and integrity that yielded a great piece of American history.

About the Author
Charles (Ted) Brusaw was a man dedicated to his family and to writing. After graduating from Miami University at Oxford, Ohio, Brusaw became a technical writer for National Cash Register in Dayton. As a hobby, he co-authored six college textbooks and wrote four novels. His first success was “Soldat,” biography of a German soldier in World War II that was chosen by Book-of-the-Month Club. He co-authored a handbook for writers which over the years went to 14 editions. He and his wife of 60 years, Barbara, have two sons, four grandchildren and one great grandson. Brusaw passed away in August, 2015. “Unknown Horizons” was his last endeavor.

Ruth Kibler Peck earned college degrees in her 40’s, then taught English for 21 years before retirement. During her career, she was honored as one of the Top Ten Teachers in Ohio, and served as president of the Ohio Council of Teachers of English Language Arts. In retirement, she wrote seven books, was a docent at the Dayton Art Institute 24 years, chaired Wright Writers of Dayton 35 years, and for five years hosted a TV show, The Writer’s Nook. Peck and her husband Walter have been married 66 years and have five grown children and eight grandchildren.