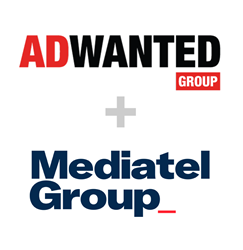 Adwanted Group today announced its continued international expansion with the acquisition of Mediatel, a major player in the ecosystem of technologies for the advertising industry in the United Kingdom.

Less than a year after the acquisition of SRDS in the United States, and two months after the acquisition of OFFREMEDIA in France, the company is now joining forces with London-based Mediatel, which dominates the British advertising and media technology market. By investing in a well-established local player with a powerful reputation in the market, Adwanted Group is demonstrating its ability to deliver on its growth strategy. This sixth acquisition is based on growth synergies, complementary tools and a shared business vision.

"Integrating Mediatel into Adwanted Group is a way for us to pursue our business goal of providing the media industry with a global standard, said Adwanted Group CEO, Emmanuel Debuyck. “Being in France and the United States is obviously a good starting point, but playing on a global stage also requires a strong footprint in the UK before any further development. We are now in three of the largest advertising markets in the world.”

With this acquisition, Adwanted Group’s French and American subsidiaries will be able to market their solutions on British soil. Additionally, this merger gives Mediatel the opportunity to export its products and services to France or the United States where it is not present today.

"Exploiting the future potential of the company with a strong strategic international partner is a real opportunity for the entire management team,” said Greg Grimmer, CEO of Mediatel. “Mediatel has a strong and talented management team, many of whom have been with the company for several years. We are all excited about the new opportunities that this alliance brings to our staff and customers.”

As part of the acquisition, Mediatel will retain all of its 70 employees, including its senior leadership team and will continue to be led by Grimmer. The company will operate under its own domain as part of the larger Adwanted Group and will work in conjunction with Adwanted Group’s other platforms across the globe.

About Adwanted Group
Adwanted Group, founded in 2012 and operating in Europe, Asia and North America, is an independent and international portfolio of cross-channel media and advertising technology platforms and advertising sales firms. In addition to the Adwanted platform, Adwanted Group operates subsidiaries including Carthage, Affinity Media, Audience Media, Media Opportunities and Access Outdoor. More information is available at https://www.adwanted.com/, on LinkedIn or by following @AdWantedCom.