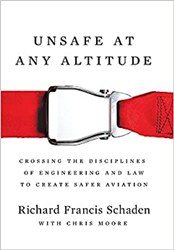 As an engineer and trial lawyer, I have spent many decades helping air crash victims and their families...

More often than not, pilot error is deemed a contributing factor in both general and commercial airplane crashes, allowing manufacturers to appear blameless in the public eye and easing consumer anxieties and concerns. However, with over 400 aviation accident cases under his belt, Richard Francis Schaden has found that design flaws and safety oversights play much larger roles in these otherwise preventable tragedies.

In his debut memoir, “Unsafe at Any Altitude: Crossing the Disciplines of Engineering and Law to Create Safer Aviation,” Schaden sheds light on findings gleaned over his decades of experience as an aeronautical engineer, aviation attorney and pilot. His story begins at Boeing, where he launched his career in aeronautical design and flight test engineering. Consequently, he also uncovered the startling truth that safety rarely took priority over economics, branding and marketing, and design was driven by competition rather than real-world performance.

In writing “Unsafe at Any Altitude,” Schaden debunks the safety myths surrounding contemporary air travel and raises awareness around the prevalence of engineering flaws and concerns that could, under the right circumstances, result in future mass fatalities. In light of the controversies surrounding the Boeing 737 Max, he hopes to illuminate the dangers looming within this airplane’s design and encourage others to join the fight to hold the aviation industry accountable and make safety a top priority.

“As an engineer and trial lawyer, I have spent many decades helping air crash victims and their families,” said Schaden. “I have found that I could do some of my best aviation re-engineering in the courtroom, rather than in the engineering departments of the aviation industry. However, the push to make air travel safer still continues.”

Ultimately, “Unsafe at Any Altitude” is a profound testament to how Schaden has successfully faced airline manufacturers, companies and regulatory bodies and made air travel a safer experience for pilots and travelers both at home and abroad.

About the author
Richard F. Schaden is an aeronautical engineer and attorney who has had a distinguished career as an international aviation and public interest attorney. He is viewed as one of the world’s preeminent aviation attorneys. Building on his engineering background and his prior work experience as a Flight Test Engineer for the Boeing Aircraft Company and a Jet Engine Project Engineer for Continental Aviation and Engineering Corporation, Schaden discovered early in his career that he could do some of his best aeronautical engineering and re-engineering, and make general aviation safer, in the courtroom rather than in the aviation industry. With over 40 years of successful litigation and trial work experience encompassing over 400 aviation accident cases, Schaden has obtained hundreds of millions of dollars in courtroom verdicts and settlements. He is also an active pilot, holding an Air Transport Pilot certificate including several jet type ratings. Schaden sits on the External Advisory Board of the University of Colorado Aerospace Department, and founded the Schaden Chair in Experiential Learning at the University of Colorado’s Law School. He is an adjunct professor at the University of Colorado, College of Engineering & Applied Science, where he designed and teaches a multi-disciplinary course bridging the concepts of engineering and law for students in both engineering and law programs.