A reminder of the roles that African American women have made in the field of education. Whether it be in or out of the classroom, the opportunity at hand for education reform summons the energy and strength historically found in the spirit of African American women. The work presents a sign of hope that the embers of activism and revolution are being fanned in rising black female leaders today. 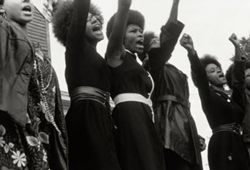 Ms. Edwards stated that she has been given the opportunity to give voice to what she believes has become the fight of the century, the right for every child to learn irregardless of demographics and economic status.

African Americans have a long history in their devotion to address the needs of children in the education sector. From freedom fighter pioneer, Harriet Tubman to Marian Wright Edelman, African American women provided a blueprint of how to gather and propel movements in communities to change the face of education.

As the conductor of the Underground Railroad, Harriet Tubman helped scores of people find their way to freedom. Not only did she lead them, but she created the pathway for slaves to have the freedom that she felt rightfully belonged to them. In essence, Harriet Tubman was an educator, an educator that guides those caught in mental and physical captivity to freedom. Currently, African American women are accepting the call to lead efforts in changing the face of education for ALL children, especially those that are caught in the political crossfire of free choice and the dire need of Special Education reform.

Powerful African American women such as Ella Jo Baker understood the importance of educating people to understand the problems at hand so that effective group action could occur. She was expert at gathering people around causes that resonated with the social justice needs of society, from education reform while in college to economic development. Strong African American women have followed in her footsteps, leading movements that involved the same commitment of moving people collectively to address the needs that will lead to a better life for most people.

The current fight in education reform is to give access to a Free and Appropriate Public Education (FAPE) for ALL children, especially children of color and those with special needs. Marian Wright Edelman began her fight in 1973 with the development of the Children’s Defense Fund (CDF). Through CDF, she spearheaded efforts to address the needs of children that had been left behind in education due to economic disparity by the development of Freedom Schools that are now located in 28 states and have educated more than 11,000 children in 87 cities across the US.

Such heroines in education have built a strong foundation for leaders today to continue efforts to push the envelope forward in providing the best education for ALL children. In this day in age, pioneers like Heidi Edwards, president of Teacher’s Partner, are dedicated to promoting education reform and highlighting committed educators who are in the trenches continuously fighting for the academic needs of children. Teacher’s Partner supports African Americans, especially women, who have made great strides in providing programming and solutions to underrepresented communities. It is the company’s goal to encourage educators in their battle to educate those that are deemed, “Left Behind,” by strategically broadcasting their work in the community to generate support, awareness, and advocacy. In a recent interview with Tech Company News, Ms. Edwards stated that she has been given the opportunity to give voice to what she believes has become the fight of the century, the right for every child to learn irregardless of demographics and economic status.

African Americans are not so much “new” to being the “Pioneers and Champions” of Education, but it’s obvious they need to renew their leading role in the fight of education reform.

For a complete look at the interview with Teacher's Partner President Heidi Edwards and Tech Company News go to [http://techcompanynews.com/interview-heidi-edwards-newly-appointed-president-teachers-partner/.

About Teacher's Partner
Teacher's Partner is a user-driven production and distribution company for educational content. The site enables teachers to share resources and revenue.