After a Tremendous Outpouring of Support, Paul Newman’s Hole in the Wall Gang Camp Announces It Has Raised the Anticipated Funds Needed to Rebuild After Fire

The Hole in the Wall Gang Camp CEO Expresses Gratitude to Travelers, the Travelers Championship, Newman’s Own Foundation and Broader Community for Incredible Groundswell of Generosity and Friendship 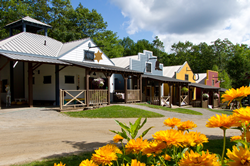 “We are deeply grateful for the tremendous outpouring of kindness and generosity from the thousands of people in our Camp family and beyond who brought us to this milestone,” said The Hole in the Wall Gang Camp CEO Jimmy Canton.

Following a significant fire at The Hole in the Wall Gang Camp on Friday, Feb. 12, CEO Jimmy Canton announced today that a $1 million match initiated by The Travelers Companies, Inc. and the Travelers Championship to inspire community support has been achieved. Canton also acknowledged that Hole in the Wall feels they will have the anticipated funds needed to rebuild the structures that were lost in the fire to best meet the current, future and varied needs of the seriously ill children the Camp serves.

“We are deeply grateful for the tremendous outpouring of kindness and generosity from the thousands of people in our Camp family and beyond who brought us to this milestone,” said Canton. “To every person who donated, every camper family that raised money on social media and everyone who reached out with their prayers and well wishes, know that we are honored by your friendship. We also want to express our heartfelt thanks to Travelers and the Travelers Championship for their extraordinary $1 million match, and to Newman’s Own Foundation for their exceptional $1 million commitment to ensure we build the future-minded buildings our children will need. It is because of this incredible support that we can now focus our efforts on rebuilding.”

On Monday, Feb. 15, longtime Camp advocates Travelers and the Travelers Championship announced a $1 million match to inspire support for Hole in the Wall’s rebuilding efforts.

“A week ago, The Hole in the Wall Gang Camp was struck by tragedy, but in a matter of days, the community responded with remarkable generosity,” said Alan Schnitzer, Chairman and Chief Executive Officer of Travelers. “The fire may have come as a shock, but the outpouring of support was hardly a surprise. The Hole in the Wall Gang Camp has touched many lives and countless hearts. We’re honored to do our part to help the Camp recover and rebuild stronger than ever.”

“It was clear from the first time I visited Camp that it was a magical place,” said Andy Bessette, Executive Vice President and Chief Administrative Officer of Travelers. “Its phenomenal programs allow kids to, as Paul Newman put it, ‘raise a little hell,’ and thanks to everyone in the community, Camp will be able to preserve the special activities that families have counted on for so many years.”

More than 3,300 donations and commitments have been received since Feb. 12, totaling just over $1 million. Included in the total are a number of pledges from generous individual donors, foundations and corporations. On Feb. 17, Newman’s Own Foundation announced an additional $1 million commitment, encouraging the Camp staff to dream the most cutting-edge, accessible and inclusive new buildings possible.

“I couldn’t be more thrilled by the far-reaching support shown to The Hole in the Wall Gang Camp,” said Miriam E. Nelson, President and CEO of Newman’s Own Foundation. “It says so much about the community that Hole in the Wall and Paul built. We are proud to be a part of the Camp family, and we know that Hole in the Wall will rise stronger to continue to serve more children with serious illnesses and their families.”

“The Camp is a charitable focus and source of inspiration for us, not only among our local community but throughout the PGA TOUR and its players,” said Nathan Grube, Travelers Championship Tournament Director. “The response from across our region has been absolutely outstanding, and we’re happy to have been there for Camp when they needed us most.”

About The Hole in the Wall Gang Camp
Founded in 1988 by Paul Newman, The Hole in the Wall Gang Camp provides “a different kind of healing” to more than 20,000 seriously ill children and family members annually. For many of these children and families, Hole in the Wall provides multiple Camp experiences throughout the year at the facility in Ashford, Conn., in more than 40 hospitals and clinics, directly in camper homes and communities, and through other outreach activities across the Northeast and mid-Atlantic. All programming is provided completely free of charge and reliant on the support of thousands of donors each year who have made Paul Newman’s dream their own. Learn more at http://www.holeinthewallgang.org.

About Travelers
The Travelers Companies, Inc. (NYSE: TRV) is a leading provider of property casualty insurance for auto, home and business. A component of the Dow Jones Industrial Average, Travelers has approximately 30,000 employees and generated revenues of approximately $32 billion in 2020. For more information, visit http://www.Travelers.com.

About the Travelers Championship
The Travelers Championship, held in Cromwell, Connecticut, is one of the premier events on the PGA TOUR and part of the FedExCup series. The tournament proudly supports the TOUR’s Tradition of Giving Back by donating 100% of net proceeds to charities. Travelers, a leading provider of property and casualty insurance for auto, home and business, is the Official Property Casualty Insurance Provider of the PGA TOUR. The company became the tournament’s title sponsor in 2007. Travelers has been doing business in the Hartford community for more than 160 years and has been a corporate sponsor of this event each year since its inception in 1952. Complete details are available at http://www.TravelersChampionship.com.