After Lighting Up Kickstarter and Raising more $150,000, Crowdfunding for the Cuppa Cordless LED Touch Lamp Continues on Indiegogo InDemand

Inspired by the look of a coffee cup, the lightweight and portable Cuppa is the first to integrate full-body touch control technology with a cordless design – and can be easily carried and moved wherever needed around the home or office 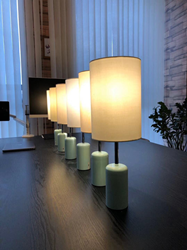 We hope to reach even more crowdfunding backers on Indiegogo InDemand as we continue to promote the portability, simplicity, functionality and reliability of Cuppa.

After lighting up backers on Kickstarter, who invested more than $150,000 in the world’s first LED lamp that integrates full-body touch control technology with cordless design, crowdfunding for the Cuppa cordless LED lamp is continuing on Indiegogo InDemand.

“We want to thank all the backers who made Cuppa such a success on Kickstarter, pushing presales more than 30 times higher than our initial campaign goal,” said Cuppa Founder Kevin Smith. “We hope to reach even more crowdfunding backers on Indiegogo InDemand as we continue to promote the portability, simplicity, functionality and reliability of Cuppa.”

Inspired by the shape and size of a coffee cup, Cuppa is a smart lamp that works without WIFI, Bluetooth, APPs, a smart phone or a remote controller – and features patent pending 360-degree ‘Any Touch’ technology that allows it to be turned on with a touch anywhere on its base. Being cordless and lightweight makes it extremely portable – and its available in three colors so it looks great with all furniture styles and home and office décor.

Cuppa has the following features:

Cuppa is also equipped with a memory mode, that allows it to be returned to its previous brightness level. Both the memory mode and stepless dimming make it easy for users to customize Cuppa to their favorite light level.

The portable light also features Type C ‘fast charging,’ which means it can provide light for as long as 12 hours with a full charge (2.5 hours) – and can last for two hours with only 10 minutes of charging. Cuppa can also be charged with a power bank, which makes it the perfect back up lamp in case of an electrical black out.

“While there are other LED touch lamps on the market today, most of them come with either long cords that make your desktop messy or short ones that limit the lamp’s use to specific areas…or they can’t be used at all if there isn’t a socket nearby,” Smith said. “Cuppa solves all those problems, which is why we think even more crowdfunders will invest in this unique lamp on Indiegogo InDemand.”

For more information, or to pre-purchase Cuppa at a crowdfunding discount, visit the Cuppa Campaign Page on Indiegogo InDemand.