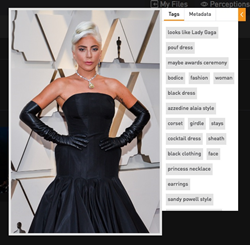 Lady Gaga at the Oscars

“With Chooch on board, SIPA can process 1000’s of images per day quickly and send them out to their media customers around the world," says Gultekin.

Chooch A.I. and SIPA USA, an international photo agency covering newsworthy events such as the Academy Awards, Grammy Awards, fashion shows, the White House and the Super Bowl are successfully working together to utilize A.I. to quickly tag photos using Chooch’s technology. Traditionally, photographers and editors had to manually enter the general caption information before SIPA sent them the images to use on websites, in newspapers and magazines.

CEO Emrah Gultekin of Chooch says,“SIPA trained Chooch to recognize subject matter for instance, models on fashion runways and fashion features, like a leopard skin dress,” says Chooch’s CEO Emrah Gultekin. “This allows them to send out images with the latest fashion tags in real time, and with more detail.”

“What was missing were the additional keywords - emotions, patterns, shapes, sizes, colors,” says CEO Jonathan Wells. “We did not have the capacity to add that manually. For example, we can easily recognize the top runway models to tag in our photos but often our customers are searching for fashion trends and those keywords are absolutely necessary.”

Now, Chooch A.I. and SIPA USA are working together to tag photos from the Oscars red carpet, fashion runways in New York, London and Milan and national sporting events. Wells says, “We don’t always know the names of all of the up and coming models, but when we send images to our foreign clients in Europe or Asia, they can find the models they know, and publish those.” In the past, companies offshored the process to India, but, speed is of the essence in this business and the need to apply accurate tags to metadata before it’s pushed out to the media is imperative - it can’t be done three days later.

By utilizing Chooch’s predictive tagging function and a workflow process, SIPA’’s photographers are able to easily identify objects and people in their photographs that are sold around the world. Chooch allows real time tagging of more metadata, and Chooch can tell SIPA
who a model is walking on a runway for Fendi in Milan even if the editors have never seen the model before.

Sipa considered other platforms, but they weren’t flexible or fast enough. Wells’s team sent Chooch a list of people (for example, a complete list of Oscar nominees) and sometimes a list of websites to look at. Chooch crawls the web in real time and finds images of people. When Chooch has at least 5 images of a person it extracts 500 plus features per image and adds it to the platform.

“Training 50 people takes less than 5 minutes, and once trained, tagging takes about 0.2 seconds,” says Gultekin. “Photos from SIPA now get many more tags, sometimes up to 30. That’s impossible for humans to do cost effectively, and getting to that scale and usability with other types of AI; this takes months, or never.”

False positives are not necessarily bad, but need to be checked. If Chooch labels a dress red instead of rose, it’s not a major flaw, but Wells says, “We have to be very careful about words and names that are incorrect, and inappropriate.” Because of this, Chooch allows users to turn perceptions like ethnicity on and off from the dashboard, reducing the possibility of unwanted tags.

The Oscars just happened and the team at SIPA knew 90% of people on the red carpet, but they don’t know everyone. That means roughly 10% of the photos would have taken a great deal of time to tag, too slow for a media industry that needs images instantly. “We had a folder of unidentified photos and Chooch tagged most of those almost in real time. That makes them go from useless to useful. What takes five minutes now with Chooch, we would have spent a couple of days working on. That’s a game changer for our business. As we refine Chooch into a more seamless workflow, we can be processing 100’s of photos per day and dozens of shoots from LA to Milan,” says Wells.

How busy they are depends on the season and that allows SIPA to tag flexibly. During the heavy fashion season, it’s not unusual to have a steady flow of 100 photos from 10 to 15 fashion shows a day for 3 weeks straight. In contrast, the Oscars generate a burst of several thousands of photos. What used to cost .80 cents per image to do manually now costs a penny, and the images are richer in metadata than ever before.

“Chooch adds more information than SIPA can do manually,” says Gultekin. “With Chooch on board, SIPA can process 1000’s of images per day quickly and send them out to their media customers around the world. Chooch’s ability to tag in real time makes business sense for SIPA and makes all of their images picture perfect for their customers.”

Chooch.ai is a leader in artificial intelligence training and visual recognition, showcased with the Chooch IC2 app available on the App Store and the Chooch Dashboard. The company provides expert artificial intelligence vision for the media, e-commerce, asset management and intelligence industries. Whether you need to auto-tag your images or videos in high detail, need expert support viewing camera footage, need to search through thousands of hours of video, or want to interact with concepts and objects in images and videos - Chooch is there 24/7.

Tom Brady with child at the Super BowlPhoto by SIPA USA