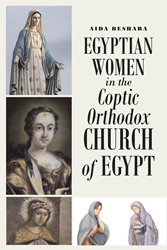 Beshara shares, “Both Egyptian and foreign historians have testified to the high status of women in all spheres of life during the ancient Egyptian period. Women were queens in their own right; once, the chief physician was a woman. In the spiritual life, there were priestesses and female musicians and dancers serving in temples. This book deals with the role of women in the Christian Coptic Orthodox Church, which was established in the first century AD. The Coptic church has been blessed with thousands of female martyrs and saints, some of whom are of worldwide fame.

“There are fourteen female saints after whom Coptic churches in Egypt are named. The Virgin St. Mary is the most prominent of them. The two Egyptian saints Demianah and Refqah are also popular. Sts. Verena and Regula are Egyptian saints who were martyred and buried in Switzerland. St. Verena evangelized in Switzerland and taught Swiss maidens hygiene practices. There are more than eighty monuments consecrated to St. Verena in Switzerland. The Egyptian St. Sophia has a world-famous church in her name in Istanbul, Turkey.

“My goal is for this book to reach English language readers all over the world and enlighten them about the contribution of women in the service of Christianity through the Coptic Orthodox Church of Egypt.”

Published by Christian Faith Publishing, Aida Beshara’s new book shares the struggles of the saints in propagating the faith among people and how they managed their lives with unwavering spirituality and stewardship to God.

Readers will be enlightened to learn and understand the dedication of female saints of Egypt whose sacrifices helped lay the foundation of Christianity for modern-day acolytes.

View the synopsis of “Egyptian Women in the Coptic Orthodox Church of Egypt” on YouTube.

Consumers can purchase “Egyptian Women in the Coptic Orthodox Church of Egypt” at traditional brick-and-mortar bookstores or online at Amazon.com, Apple iTunes store, or Barnes and Noble.

For additional information or inquiries about “Egyptian Women in the Coptic Orthodox Church of Egypt,” contact the Christian Faith Publishing media department at 866-554-0919.