Al Badger’s new book “Voyages" explores how he was born just before World War II began, and he is very surprised now that he is much older how much the world has changed and how he had to change careers with it to be successful. He wrote this book initially as a present to tell his grandchildren about the world he grew up in. 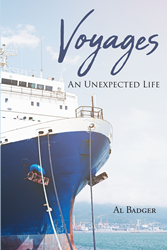 Al Badger, who was brought up in Nahant, Massachusetts, near Lynn, and the son of a small-town policeman and a second-generation Irish mother during World War II and its aftermath, has completed his new book “Voyages": an autobiographical tale about how the author began lobster fishing in a smelly old wooden dory with his father with traps scavenged from the beach. Eventually, he was mentored by a professional second-generation Italian lobsterman and boat builder in the waters of Nahant and Boston Harbor.

According to Badger, “I was paid to travel to Puerto Rico, war-torn Germany, England on a former troop ship, and South Africa where I discovered the evils of apartheid first hand plus the major ports of Eastern Africa and how they lived much different from us! After arriving home, I made two trips through the Panama Canal and visited all of the major cities on the west coast of South America. Two years later, I graduated from the academy and received a license to operate huge merchant ships and worked on some of the nicest cruise ships in the world to the historic ports of Europe, Greece, Egypt, North Africa, India, Pakistan, and Burma. Traveling the world gave me an education that helped shape the rest if my life. Eventually, I left the sea for shipyard work where I helped build the world’s first nuclear-powered Navy cruiser and eight nuclear submarines. Eventually, the Cold War was over, and I moved on to nuclear-powered electricity-generating plants ashore with a Boston engineering firm.”

Published by Page Publishing, Al Badger’s gripping work delves into how he learned how to build wooden boats whose engines were salvaged from junked wrecked cars. After participating in high school sports in Lynn, he was admitted to the United States Merchant Marine Academy at Kings Point, New York, where he was educated as a merchant ship engineering officer, traveled part of the world, and received a merchant Marine engineering license, an engineering degree, and a commission of ensign in the US Naval reserve.

After more sea time as an engineering officer aboard passenger ships and freighters around the globe, with his engineering education, he was hired at a part of Westinghouse that designed and supervised the construction and start-up of the reactors for most of our Naval nuclear ships, including the world’s first nuclear-powered cruiser, which he supervised completion of plus several nuclear submarines in various shipyards. When the Cold War ended, he finished his career as an executive in a large engineering firm in Boston, building electric-generating stations domestically and gas-oil-processing plants overseas.

Readers who wish to experience this inspiring work can purchase “Voyages" at bookstores everywhere, or online at the Apple iTunes Store, Amazon, Google Play, or Barnes and Noble.