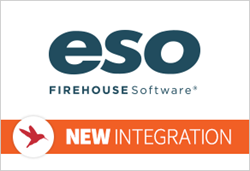 It does save a lot of time and is more consistent in the documentation, 'cause guys make mistakes all the time. The bigger the call, the more efficient they become in doing the report. It makes it quicker and more accurate. -- Battalion Chief Bill Whyte, Crystal Lake (IL) Fire Dept.

The Crystal Lake (IL) Fire Dept. has used Aladtec for its scheduling since 2013, but all records for training, inspections, and NFIRS reside in the ESO Firehouse database.

Whyte wasn't doing reports when he "started as a blue-shirt" back in 1996, but record-keeping then was exactly like a scene from the firefighting drama-thriller movie "Backdraft."

"They talk about a book, where they write down the calls. When I started, we were practically right there. It was a logbook -- graph paper, time, and where we went. The lieutenant would write in it every day."

"I've been involved in keeping records for the last 17 years, I can tell you, we went from growing that, into more of a paper form … It's come a long way. There's still ways to go, but yes -- it's changed tremendously," said Whyte.

The Aladtec integration "simplifies having to add the people every time you go on a call, on every rig. So now when you pick up to add the personnel, it's already there."

"Whether it's a simple burning complaint to a structure fire, all of our calls go through the exact same process," Whyte explained. "The people responding to the call -- if it's an ambulance crew, then the senior paramedic is the one in charge, and he'd be the one responsible for starting and completing the initial report. On a structure fire, it's usually the first-arriving officer who's in charge of starting the report.

"Once that is done, the company's officer is responsible for reviewing that report. Then me, as battalion chief, I review all of my reports as a shift commander in charge of 20 people at the end of my shift. And me, being in charge of the statistics and all that stuff, once a month, I review the entire month again, then I go through the process of creating the file to send to the state," said Whyte.

"The good thing, it changes because we have multiple people who change at different times of day for different reasons, so all that movement is captured in the roster because it goes along with the (Aladtec scheduling) program."

"It does save a lot of time and is more consistent in the documentation, 'cause guys make mistakes all the time. It's one thing for a simple ambulance call in the same house, but sometimes on a structure fire, they don't always remember whose on this engine, because they're not in the same house. The bigger the call, the more vehicles, the more efficient they become in doing the report. It makes it quicker and more accurate," Whyte said.

Harrisburg (NC) Fire has used Aladtec for its scheduling since 2015, and ll records for training, inspections, and NFIRS reside in the ESO Firehouse database.

Battalion Chief Tim Wooten said Harrisburg's 42 members work three shifts from three stations, responding to 2,546 incidents last year -- about 56 percent of which were medical calls. They cover an area of about 32 square miles and 20,000 people, just north of Charlotte.
Each shift is led by a battalion chief, overseeing captains, engineers, and firefighters.

Previous to importing the integration, the reporting officer would need to identify each individual and which apparatus they rode. "This could be somewhat time-consuming with the amount of swaps, trades, and transfers we do as a small department," said Wooten. "We had groups set up, but with our frequent changes, those groups only worked some of the time."

Wooten estimates the integration saves a few minutes on each report completed, "however for the ease of entering the proper personnel in an accurate and timely manner; it has been a great addition. We were seeing some errors with all our personnel changes, and users were just not checking to assure the correct people were listed."

"I would suggest that the user have a good understanding of the Specific IDs and how those relate to the individuals in Firehouse and Aladtec. Also, the process of our setup was made easier as we had our truck schedules built already in Firehouse."

Aladtec provides online scheduling and workforce management software for mission-critical agencies such as EMS, fire service, law enforcement, and dispatch. The smart platform puts real-time staff scheduling, time and attendance tools, in the palm of your hand. It tracks licensing and certifications, offers customizable forms and reporting, and allows leaders and members to communicate instantly, saving time and money.

Founded in 2003, River Falls, Wis.-based Aladtec serves more than 2,250 customers across the US and Canada. Annual subscriptions include all setup, training and unlimited support. To learn more, visit http://www.aladtec.com

ESO is dedicated to improving community health and safety through the power of data. Since its founding in 2004, the company continues to pioneer innovative, user-friendly software to meet the changing needs of today's EMS agencies, fire departments, and hospitals.