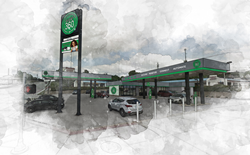 “Today more than ever, tech-based companies especially need to adapt to the changing competitive landscape and have the courage to innovate with different go-to-market strategies,” said Richard Ginsburg, president and CEO, Alert 360.

Alert 360, one of the nations’ largest providers of home and business security and automation, has broken ground in Tulsa on a new go-to-market concept – the Alert 360 Retail Experience Center.

The Alert 360 Retail Experience Center will allow Tulsa consumers to enjoy user-friendly, hands-on experience with some of the best home security, business security, and smart home solutions available. For convenience, Alert 360 is locating the center on one of the highest traffic corners in Tulsa, at the site of a former gas station. The company will create an inviting space for current and potential Alert 360 customers to view, interact with, and design an infinite number of options in home and business security, automation, and IoT (Internet of Things).

Voted as a Best Home Security Provider and awarded a Best Places to Work in Oklahoma for four consecutive years, Alert 360 has provided award-winning security services to thousands of Tulsa home and business owners for nearly a half-century.

“With the integration of home and business security systems with automation, smart devices, and smartphones, our services have become commonplace and popular especially among Tulsa’s tech-savvy home and business owners,” said Don Fuson, general manager, Alert 360 Tulsa. “Home and business owners most often use our free mobile app to view, connect with, and manage their homes or workplaces when they can’t be in two places at once, so it makes sense to provide a convenient location for people on-the-go to stop and visit with us.

“Today’s security solutions – from security cameras, doorbell cameras and smart locks to automated lights and entertainment systems – are easily operated with the tap on a keypad, phone, or Apple Watch. Our new Alert 360 security retail space will provide a place for security consumers to experience this and more,” Fuson added. “We chose a high-traffic space that would allow customers who are interested in security or home automation to stop by, easily park, and visit."

At Alert 360, we support more than 75 different IoT and security products and there is no better way to show our capabilities than in person. Additionally, as a Tulsa-based home and business security company, this is an ideal place to launch our first combined retail and branch location, which can be emulated across our national footprint.”

The retail center will contain a more robust version of Alert 360’s Mobile Experience Centers, which were launched in 2018 and have been successful in demonstrating the many benefits of today’s and future security and automation products to thousands of consumers. As a top 5 home security company in the nation, Alert 360 partners with global technology providers to continually develop and offer home security and business security services that create a better experience for consumers, including this new retail center.

“Today more than ever, tech-based companies especially need to adapt to the changing competitive landscape and have the courage to innovate with different go-to-market strategies. While we have focused significant marketing on the digital front at Alert 360, there is nothing like a consumer being able to touch, feel, and try our security products in person and participate in a demonstration with an Alert 360 security and automation expert,” said Richard Ginsburg, president and CEO, Alert 360.

Alert 360’s new Retail Experience Center in Tulsa also will have an open-air event space. In this space, the company plans to host community events and open houses, sharing valuable security tips, crime prevention solutions, and support of local Tulsa charitable efforts. The Alert 360 Retail Experience Center is scheduled to open in the third quarter of 2020, with a showcase of new Alert 360 products and services developed in conjunction with the company’s technology partners from around the world. W Design is serving as architects for the project.

“We are honored to be a part of Alert 360’s growth and to collaborate on the visual branding of the company’s new location at 61st & Sheridan,” said Weldon Bowman, founder and principal, “It’s important to us to re-purpose Tulsa’s existing architecture by creating a unique experience for Alert 360’s customers, as well as the general public.”

In addition to its Tulsa location, in Oklahoma, the company operates an award-winning monitoring and customer service center in Tulsa and has branches in Clinton, Miami, and Oklahoma City. Alert 360 also has a network of branches from coast to coast, providing local security services for its more than a quarter of a million home or business security customers. Your Local Alert 360 Home Security Company Can Help! Home security specials up to 25% off retail! Find a local Alert 360 home and business security office here.

About Alert 360
Founded in 1973, Alert 360 is one of the nation’s oldest-licensed alarm monitoring providers. Today, the company is the fifth-largest provider of monitored home security and home automation solutions in the United States. The company has achieved Five Diamond alarm monitoring designation and has been named an Inc. 5000 “Fastest-Growing Privately Held Company in America,” a “Best Home Security Provider,” and a “Best Places to Work.”

Alert 360 LogoWhen you see our round green yard signs, you know there is 360 degrees of security surrounding the home or business.