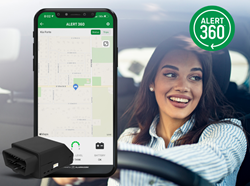 Our Connected Car is a natural progression of our award-winning alarm monitoring and security services to include where families spend a lot of time – in the car, said Duane Dietrich, Vice President of Information Technology at Alert 360

Through one interface, the Alert 360 Connected Car allows consumers to receive important vehicle insights, security notifications, and trip history. Additionally, when integrated with a smart home security system, the Connected Car allows drivers to enjoy increased awareness of activity at home and home automation options related to the vehicle’s location.

Alert 360’s Connected Car uses a dedicated cellular connection and has battery backup. It communicates with the security system and user, even when the vehicle’s engine is off.

The technology integrates with the free Alert 360 app, allowing users to create rules and receive Alert 360 notifications about specific vehicle details, such as:

Vehicles with Alert 360’s Connected Car installed can be added to a user’s existing Alert 360 smart home security system to trigger automation rules and reminders using the vehicle’s location. For example, home lights can turn on and the temperature adjusts as a driver arrives close to home. Or, alerts are sent to a driver’s mobile device if they leave home without closing the garage door or locking the front door.

“Alert 360’s Connected Car is the perfect device for ensuring my new, teenage driver is safe and obeying the rules of the road,” said Derek Andrews, Alert 360 customer from Coconut Creek, Fla. “Additionally, the Connected Car is going to help keep the whole family safe by always knowing where everyone is located with a click of an app.”

Alert 360’s Connected Car is available through Alert 360 authorized dealers and branch offices as a standalone solution or add-on to an existing Alert 360 system. The Alert 360 Connected car is compatible with most cars manufactured since 1996. Customers can opt to plug the Connected Car device into a vehicle’s OBD-II port for easy self-installation.

Consumers also have the option to visit one of Alert 360’s 17 locations across the United States for assistance or have a professional security installer come to their home or business within 24 hours of ordering. Visit https://www.alert360.com/connected-car/ to learn more about the Alert 360 Connected Car.

“According to U.S. Department of Transportation and AAA data, Americans spend approximately 84 billion hours driving each year and make an average of 2.24 trips in their cars per day. Our Connected Car is a natural progression of our award-winning alarm monitoring and security services to include where families spend a lot of time – in the car,” said Duane Dietrich, vice president of information technology at Alert 360.

“We also make installing the device easy for busy parents. The installation takes 10-minutes and seamlessly integrates with Alert 360 home security systems. We’re extremely excited to expand our protection services to vehicles and offer this as an introductory service for those who may not already have Alert 360’s security or automation systems. In line with our teams’ mission to make our customers’ lives safer, comfortable, and more convenient, we’re also hopeful our Connected Car helps make summer road trips and vacations more relaxing.”

Founded in 1973, Alert 360 is one of the nation’s oldest-licensed alarm monitoring providers. Today, the company is the fourth largest provider of monitored home security and home automation solutions to homes in the United States. Alert 360 operates a monitoring and customer service center in Tulsa, Okla., and has offices coast to coast, serving customers in 26 states. The company has achieved Five Diamond alarm monitoring designation. It also has been named an Inc. 5000 “Fastest-Growing Privately Held Company in America” and a “Best Places to Work” for five consecutive years.