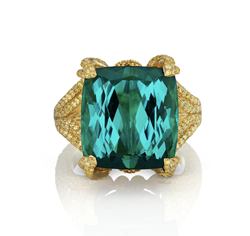 I really admire Irish culture’s emphasis on family, community, and caring for other people’s well-being. The Irish believe that helping a fellow human is the right thing to do, and that no amount of money or privilege can make any one person worth more than another. I believe this too.

In marriage, bonds are created amongst family that bring community and culture together, and at times for the benefit of arts, stunning inspiration for design. When fine jewelry designer, Alexia Connellan, married Playwright and Novelist Brendan Connellan in 2013, she gained inspiration from Ireland itself, and her beloved Father-in-law, Liam Connellan. In advance of St. Patrick’s Day, and in homage to the country’s green countryside, Alexia has assembled new jewelry designs featuring green gemstones at the center.

Alexia Connellan's father-in-law, Liam Connellan, was the Director General of the Confederation of Irish Industry (C.I.I.) for 20 years from 1972, a pivotal period in the development of Ireland as it took membership in the European Economic Community (E.E.C.) and expanded its trading networks to the continent. Over the decades, he made sterling efforts to ease the path forward for Irish businesses, both large and small, and was a regular presence on television to make their case.

In Liam’s later career, he channeled his efforts to help others in need. In the mid-1990s, he asked Fr Peter McVerry if he could use his industry contacts to try and raise money for McVerry’s homeless outreach program and, over the next 20 years, the number of beds available and services offered increased more than tenfold. Asked why, Liam Connellan said he "just wanted to do some good." The importance of thinking of others less well off than oneself, core to Irish culture, influences Alexia Connellan today, and she has dedicated her sourcing to support the Artisanal and Small-Scale Mined (ASM), whose communities which are mainly composed of BIPOC (Black, Indigenous, and People of Color), like her. In response to the Hibernian designs, Liam Connellan says, “I am delighted if anything I may have done, served as any inspiration at all in another to try and do good."

In 2014, Liam Connellan was awarded an honorary doctorate at University College Dublin (UCD), an honor only given to graduates who have made an outstanding contribution in their chosen profession. Brendan Connellan is also an alumus of UCD, graduating in 1993, with a degree in Chemical Engineering; Liam graduated in 1958 with a degree in Engineering. Continuous education is important to Alexia Connellan in her business, and her favorite Irish phrase is "Mol an óige agus tiocfaidh sí" which means "Praise the Youth and they will flourish." A young designer, who loves Celtic jewelry and visiting Glendalough and Doolin, Alexia continues the Irish legacy through continuous appreciation of the culture and celebrating family.

“I really admire Irish culture’s emphasis on family, community, and caring for other people’s well-being. The Irish believe that helping a fellow human is the right thing to do, and that no amount of money or privilege can make any one person worth more than another. I believe this too. That ethos is something both Liam and I share in our work and in our ambitions—to make the world a better place, even if it’s just for one person.”

Honoring Ireland’s connection to the color green, Alexia Connellan’s Art Deco-style Gatsby Earrings are meant to be worn five ways: as a diamond huggie, as tailored yellow circle drops, with a long diamond dangle off the circles, with a green tourmaline crystal dangle, and with either of the drops as a pendant on a chain. Connecting the Irish immigration to the American Dream, the green tourmaline also evokes “the light at the end of Daisy’s dock in the Great Gatsby: the green light of endless possibility,” says Alexia. Another nod to Irish green and new beginnings, dually inspired by John Evert Mill’s painting, Ophelia, is the Ophelia Ring. In this piece, the green of the Irish countryside meets the teal of Caribbean waters, and is reminiscent of the artist’s birth country, Jamaica, within the mesmerizing 18.66 ct. cushion cut indicolite gemstone, center to the statement piece.

Alexia Connellan says, “The very first time I saw Ireland, I was shocked at how beautiful it was - and, yes, how green! There are shades of green in Ireland that I have not seen anywhere else in the world. From the seafoam green water of Donegal to the moss green grass of The Burren, Ireland's otherworldly beauty is inspiring. I trust that all Irish eyes will be smiling and joyful when glimpsing the velvety green of the Gatsby pendant and the energetic teal of the Ophelia ring. I hope these jewels remind all those who look upon them to appreciate the beauty of Ireland in all its majesty."

Energized by the positivity and beauty of Ireland, and the contribution of her Father-in-law, Liam Connellan, Alexia has developed new fine jewelry pieces, in homage to her family’s Irish roots. To learn more about Alexia Connellan, or to inquire about sales, visit alexiaconnellan.com, or email boutique@alexiaconnellan.com. For inquiries regarding this press release, contact Pietra Communications at 212-913-9761, or email info@pietrapr.com.

Recognizing that many mining communities are composed of BIPOC, just like her, Connellan is committed to ethics and sustainability in sourcing and design. She uses ethically sourced Artisanal and Small-Scale Mined (ASM) colored gemstones and post-consumer recycled diamond melee, in her pieces whenever possible. Connellan aims to both benefit the environment, and bring more money and resources directly to local mining communities. An advocate for change, she encourages fellow designers to question gold and gemstone sources about mining practices, instilling a positive mark on the trade. Visit alexiaconnellan.com to learn more.