“Vatican Impeachment” from Christian Faith Publishing author Alfred Lenarciak is a compelling read that tackles that absolute power of the pope and how his election and position has brought controversy and uproar in the Roman Catholic faith. 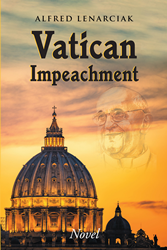 “Vatican Impeachment”: an in-depth narrative concerning the pope’s call to power through election that proves to be a pivotal mark in ensuring the Roman Catholic faith’s perpetuation or downfall. “Vatican Impeachment” is the creation of published author Alfred Lenarciak, a member of Cavalieri San Silvestro who was honored with the Silver Cross of Merit.

Lenarciak shares, “Democratic elections are a privilege of the people to choose their leaders in order to govern them through various levels of public administration. Elections are polarizing exercises of the political powers competing for popular votes, presenting their programs which are expected to be fulfilled.

“Every candidate must stand in front of the people demanding their approval, meaning votes, and the majority form the government. Democracy has been known for three millennia and today represents the most popular form of government—with one exception.

“The Catholic Church today is in crisis and very divided, trying to regain back the followers who are drifting away from the doctrine of the Pope. Most Catholics are confused if the Pope is their spiritual leader or a politician with radical ideology. He is implementing a revolution in the Church institutions following his own doctrine of purging those who disagree with him without forgiveness.

“The majority of the cardinals who elected the current Pope in March 2013 sincerely regret it and now are waiting for a miracle to end of this pontificate. How to elect the righteous one? Could an American cardinal be elected Pope?

“Could the Pope be impeached?

“Who could have the courage to change history?

“This is happening now.

“This story brings the reader behind the Vatican gates protected by Swiss Guards’ halberds and discovers the intrigues, hypocrisies, ruthless politics, cronyism, corruptions, cover-ups, and clashes of various interests.”

Published by Christian Faith Publishing, Alfred Lenarciak’s new book unveils numerous idiocies revolving around the supremacy of the pope and the controversies that come with his position as one of the most powerful and influential human beings on the earth.

This book hopes to address the limitations and scope of the pope’s administration and how thus greatly impacts individual and communal faith in the Roman Catholic Christianity.

Consumers can purchase“Vatican Impeachment” at traditional brick-and-mortar bookstores or online at Amazon.com, Apple iTunes store, or Barnes and Noble.

For additional information or inquiries about “Vatican Impeachment,” contact the Christian Faith Publishing media department at 866-554-0919.